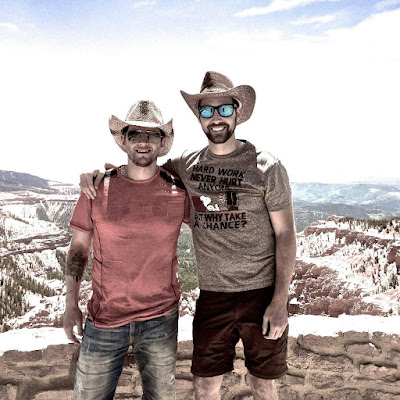 When Will died, I spent so much time hiding in my basement, writing things here: songs, poetry, anything that would offload some of the things that were too overwhelming to me. I took a lot of walks and drank too much in silence...in the night. I disappeared. I shut people out of what was going on with me because I wanted to punish myself and didn't want to hear good advice or any logic that may stop me from hurting myself. It got to be too much and I needed a break. I knew I needed to get out immediately. Out of my head, out of this city of monuments to our memories together, and out of this house that was filled with his ghost.

My wife and I flew to Vegas to see Andy. Andy is sometimes called Vern here, and although he has different parents, we once sliced our hands wide open so that we could share our blood. We wanted to be real brothers more than anything. Andy knows absolutely everything about me. He's one of the people that I never share casual conversation with. What a blessing that is!

My flight landed and my wife and I got a week to escape every terrible thing that was waiting for our return. We saw the Grand Canyon, which is the most overwhelming place I've ever been. We saw the Hoover Dam under construction, mountain goats that run fast and climb well, a little old lady named Rosie that hand rolls chocolate raisins on the roadside. We saw grey steak and a friend of ours actually eat it. We saw the world's coldest smoothie that you can set in the sun for hours without melting. We saw this guy flash his headlights at us to warn us that a cop was a half mile behind him. We saw mountains, native American things, turquoise necklaces, men catcalling us at a gay karaoke bar, and the most terrible Herbst that has ever existed.

As we put our luggage on the rack and turned to say goodbye and return to the misery that would be only partly temporary, me and Andy caught each other in the eyes. People that love each other can see everything in the other's eyes. I think we both almost broke down. I hugged him and I left. I'm not really sure what was hurting me more: leaving my brother when I needed him the most, or returning the the siege that would be my life for the next several years. I don't think that matters much I guess. Because I'm here, and I'm through it, and I'm happy.

I think it's really important to keep those close to you as close to you as you can. The world isn't going to give you any breaks and it doesn't care about whether you are gonna be ok or not. These are the people that sit with you while your head is in your hands. They will lift you out of it. Laura,  Andy, and Josh were the only people that knew me enough to know I was in trouble, and I am so grateful that God put them in my life.


I've had some really tough years. I've been so angry and so sad. I've pushed people out and painted the clown mask for everyone else. I didn't think I'd find a way out of it, but God has carried me, through the people that love me most. They've felt the fire carrying me out. I want to thank them now that I'm on the other side of the worst of it. I've written so much about the rock that my wife was when I needed her to be. This one is for Andy. I hope to write about the rest of them soon

Email ThisBlogThis!Share to TwitterShare to FacebookShare to Pinterest
Labels: Andy, Will