The Lion - A Short Story (Prequel to Hospice) 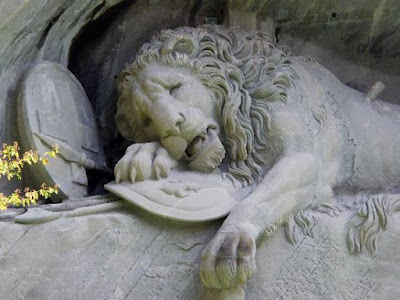 The alarms went off and everyone started running in every direction. I only knew what way to go, and that was to her...to home.

I ran as fast as I could. There wasn't even a bike I could borrow. I just ran, hoping I could outrun my death. I got about a block away from my house before I began to doubt that I would make it.

My mom was special. She had cancer. Cancer isn't special. Cancer is a Satan and he was going to take her from me at 5 years old, I just knew it. I just remember feeling so hopeless watching the world darken and turn into terrifying shapes I will never forget. The wind picked up and the sky got really dark. I ran past the Whitakers and their wind chimes were singing a terrible song. Garbage cans and newspapers flew everywhere. But I pushed forward to my house, that held my mother.

Me and my mom used to write on each other's backs at night. It was a fun game that we always played, no matter what. She would draw either a word or a picture on my back and I would guess. When one of us made a mistake, we would erase the entire palate like one would a chalk board. I would draw on her back, and she would draw on mine. We would do this until one of us didn't turn around for their turn. Then the other would know they were asleep, and then go to sleep themselves. Going to sleep felt so lonely to me.  I rarely slept first. I always waited for her. I had to protect her.

Who else would? My dad left before I was born. I didn't have any siblings. I was the only "man." He left before I was born, denying all kinds of things. She didn't drag me through it...she walked away, risking our well being for my dignity. And now here I am running from a dark siege toward my home that I grew up in; that hadn't been fortified or fixed in decades, to get to my mom. I needed her and she needed me. We were each other's cure for loneliness. We were also each other's cures to the terror in the world.

The wind blew me down to the ground, planting my face into a wheat bail. I got up immediately and started running, while also staggering toward the front door. The wind struck again, throwing me onto the bending stalks of corn. I got up again and set my eyes to my home. I ran toward the door as the wind pushed me to the right, then suddenly to the left.

The front door burst open and there she was. My mom came running out. I knew she would. I knew she had to be there. I was scared she wouldn't be, but I just knew she would. The wind blew her down the moment she stepped out of the house. She got back up and forged ahead to me. I wasn't as brave as I was a moment ago. When I saw her, I became a kid again. I was scared and showing it. She fell several times before she reached out her hand and grabbed onto my shirt. She pulled me to her chest, then dragged me staggering to our house, closing the door before we were sucked out.

I had made it home. She pulled me by the hand to the bathtub and as we sat in it she was sitting with her back to the storm and me sitting between her legs, with her arms wrapped tight around me. I felt safe. I was home, and that was all I needed to be.

The wind blew the roof off and sucked every piece of furniture out of the house. It was a slowly twisting mass of darkness that took all of our things and brought down the wall joists and load bearing walls on top of us. Everything was shaking and I could hear my mom grown as objects hit us from every side. I heard her pray to God for help. I heard her cry and beg for God to save me... Me.

Hours later, we laid at the bottom of a lot of rubble. We couldn't see sunlight or hear any commotion. We just laid there in the bathtub, below everything that makes a house. I felt a familiar finger on my back. She said, What do you call chase...no cheese... that's not your own? I had already heard it, but I shrugged my shoulders anyway. I pretended to laugh at her answer by shaking my tiny diaphragm. She wrote everything about her life on my back and kept shaking me to keep me awake. She wrote that she loved me so many times I lost count. I couldn't answer, something kept me from speaking. There a was a pressure on my chest and a weakness in my throat.

I told her I loved her back in my mind, every time.

We laid there until be both fell into a deep sleep. To be honest, I fell asleep first. I don't know how long she wrote on my back. I don't want to know. But I do know that at the darkest point of consciousness,  I saw the sunlight. I opened my eyes to it first and immediately looked for her. Things were blurry, but I found her hand hanging from a gurney. I tried to get up. I tried to shout to her. I couldn't produce anything that would disrupt the atmosphere. I thought she was dead. I fell asleep again.

I would wake days later with an IV in my arm, staring up at ceiling tiles. It took a few moments for me to remember who I was, or where she was.

Then I heard her voice. I looked to my left and she was reaching for me. I grabbed her hand and we both cried for very different and the very same reasons.

Thanks for reading...Z
Posted by Zombie at 2:53 AM