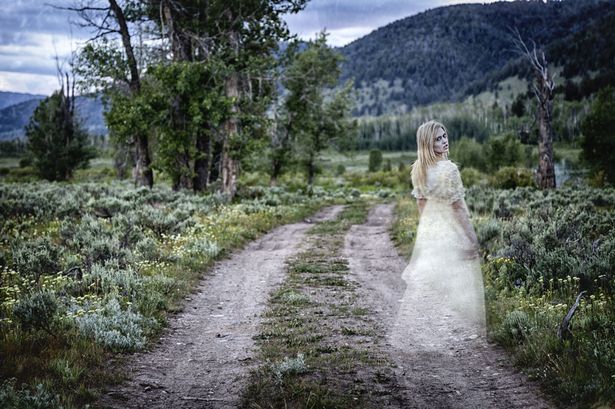 I sat in the corner of the room furthest from anyone that would notice me. I sat biting my nails. I have the hardest time with crowds because I feel like they are all looking at me. I say strange things and have a twitch that begs people to ask questions that make me even more nervous. I came to the party because I needed something different. I've grown tired of living where no one else dwells. I'm in a basement, staring out of a blurred glass block window at the sounds that resinate from other peoples lives. Their lives were filled with laughter and I wanted that. I wanted to let every part of myself go.

I went to the party: I used the same coping mechanisms my father; who was stricken with the same fear, taught me whenever I refused to let it go. "When you decide to see the world, go to the corners and watch for your moment," he would say. I haven't spoken to him in a decade. He passed on holding my mom's hand as he let the leukemia take him suddenly. He was working on the fire pit in the back yard and collapsed. It took the disease two days to take him from us.

I was about to leave the party. I had lost hope of any "moment" happening that would change anything going on in me. I thought about what he had said to me and it made me mad, because he was wrong, but even more it made me miss my dad so much. I was almost in tears when I felt the cold rush of some kind of fluid run down my back like a knife to my lungs. I turned and looked at her right in the eyes as she stood over me sitting on the basement stairs. She grinned and offered no apology. I looked at her again, this time with a little anger in my face. She smiled at me full out.

"What? Really?" I said. She just looked at me. I nodded and got up from the stairs to meet her hand on my shoulder pushing me back down. "You're an idiot," she said. "All of this life in this room, and you're in the shadow of it, playing with the assholes in your mind telling you to stay out of it. I just looked at her. She was beautiful. She was so pretty that I couldn't speak. I had seen her before in a couple of undergrad classes. She was always loud and making jokes. As far as I could see, she didn't have a lot of friends, but she was always engaging people. Like, this guy did an assigned presentation in front of a class of 100 students and at the end part when he asked if there were questions, she asked five. None of the questions were really answered.

I didn't know what to say to her, so I said, "I'm just putting the feelers out." She laughed at that and sat down next to me, right in a puddle she had purposely made with the drink she had purposely dumped down my back. "My mom was crazy you know," she said and continued, "She kept setting things on fire until she ended up in an institution. How does that make you feel?" she asked. "It makes me feel bad for you," I reply. "See that's the thing; people always want to feel bad when someone tells them a bad story. It's a part of human nature that is flawed. People want to respond by saying they're sorry because they imagine their mom being mentally sick. They project their lives onto others. They never want to think about the alternative way of feeling. They don't want to think that the other was spared from a life of terror and even death by fire from an unstable person incapable of loving." I didn't know what to say, so I didn't.

"My dad raised me alone. He never did a single thing wrong. He was too anxious to make mistakes. I think my mom and dad attracted to each other because of their similarities. It was their differences that saved my life. She let it all go and burned down all of us. He kept his white knuckles on the reins and held me behind him as he took the bullets." "Where is he?" I ask. "He died in a house fire in the middle of the night the year I went away to college," she replied and continued. "He took her back and she wrecked the world that keeps spinning all around us. It's funny when you think about that. In reality, we circle the sun, revolving around every day that revolves into years. The entire time, we think the world is revolving around us."

"I think that's why you're so scared," she said.


She got up and walked away, through the small hallway and out the front door. Everything inside of me screamed in my father's voice, "This Is Your Moment!!!!!!" I took a few really fast breathes and got up and ran to the door chasing her. I reached her as she was about to get into her car. "I want to know you!" I said in an urgent tone that I regretted, but not really. I did want to know her. She seemed to see right through me like she knew me, and I wanted to see her. She looked at me and kissed me on the lips. The entire world became still and watched this moment as the world spinned around the sun slowly. I felt my body tremble incessantly and my fear begin to melt into the moment of kissing my first love...kissing this girl I barely knew, but somehow was the closest person to me in the entire world.

A tear rolled down her face as she looked at me. She didn't say anything. She held my face in front of hers with her hands and looked directly into my soul. It seemed like an hour, but was only minutes. It took a few seconds for it all to implode me as she got into the car and drove away, leaving me without any words. I hit my knees and just stared into the sky. I felt like I was aligning with the world and we were becoming a part of each other. And she was gone.

I searched the entire earth for her for years and years until I gave up searching. I graduated university and got a degree in bioengineering. I was successful from the very start. I made a million dollars my first year out of college and almost doubled that the next due to investments. None of it made any sense. I was being driven by a force that was a ghost. She was so active inside me, yet no where to be found. I worked as if she could see me, because I always pictured her watching me from wherever she was.

Ten years after college I was sitting on the bench in front of a hot dog stand eating a coney I had bought. I was reading the paper and on the seventh page of the "local news" section, it read, "Body found in Gregory Park identified as Sophie Hawkins." The article contained a photograph of the only love of my life, just as I had remembered her. I saw her photo and lost my heart onto the cement. I had missed her for so long and here she was in the newspaper, telling me she had gone missing the night we met. Everyone in the world was searching for Sophie as I was; only to find her lying as bones in the brush behind an old abandoned horse shoe pit.

They didn't ever figure out what happened to her. She was a ghost to me that I would never know anything about. But what I hold on to is the moment she put the guts inside me to chase her. That night, she was the "moment" my father was talking about.

I would learn to live for the moments that gave me a chance and drive to leap from the twisted knot that imprisons me most days; searching for Sophie.

Thanks for reading...Z
Posted by Zombie at 2:46 AM