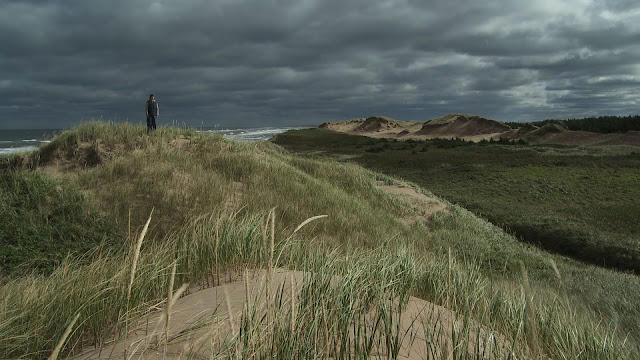 4-23-2035
I went to the park today. For a few moments I pretended that there were people left here...that we were all alright down here. I sat and listened to songs we would listen to in high school and watched the grass blow in the wind. If I closed my eyes, sometimes I felt like I was back there. I could feel what my brother's laugher felt like; so hardy and full. I could see myself laughing too, as if nothing in the world mattered or was wrong in any way. I could even sometimes smell the spring and fall coming. I looked at the cracks in the dirt and think about all of the people that lay dead below me. Then I think about all of the people that are dead among me. That thought brings me back to reality. I'm a 35 year old man in a gas mask, sitting in a park that no one has been to in over 5 years.

So you want reality? Who are you who reads my thoughts? Who are you to ask me questions? Reality is that I was sitting in a van with my two brothers. We were getting ready to go fishing in the middle of the night; putting on our gear. We were talking about how great it felt to put on new socks, when the world blew up. The van flipped over and over and one of us was thrown from the passenger window into the water. He either drowned or was killed by the explosion, but he was floating in the water nonetheless. The other brother was missing some parts. He was driving and he was clearly dead just by looking at him. I was the only one to leave that van alive that day...that moment.

Vans blew up all over the world. They kept blowing up everything until everything was gone. As far as I could see it, I was the last one here; the lone survivor of the fruit of our hateful and rancid work. No one builds 200 million dollar bombs without intent to use them. So there it is. That's what happened. And nothing has happened since. The airwaves went down. The power went out. The sun stopped shining. The darkness took control of everything. If I needed light, I needed batteries. If I needed heat, which was always, I needed generators. If I needed generators, I needed gasoline. If I needed anything, I needed something else to get it. It's a full time job remaining alive.

I sent signals over the airwaves. I sent signals with smoke. I sent signals with fireworks. No one was listening because everyone was too busy being dead. It's difficult to fathom. I was always religious, so it gives me mixed feelings about being alive. I've always been so scared of death. The knowledge that no one escapes it and it's coming scares me. When I was a little kid, I thought adulthood was so far away, but then it happened like time never really passed. So it scared me to know that in a few years, I would be dying an old man, probably with Alzheimers while defiling my pants. So on one hand, I am thankful to not be dead, but not really sure how I feel about being the only person alive. A lifetime can feel like minutes.


7-13-2060
So do you still want reality? I'm old. I run everyday, but I am so much slower than I used to be. I get dizzy sometimes when I stand up and pass out. The sun has begun to shine from time to time and I take my mask off for a while to breathe what the earth is giving me. I last about 4 minutes before I can't take it anymore. You know what's funny? A thing I can't explain? All people are dead, but Facebook is still online somehow. There is nothing new and my primitive knowledge of computers tell me it's just my cache or cookies or something giving me a picture of what was on my computer. I don't really know why. Three things have survived; Facebook, my computer, and me. I wonder who will last the longest? All I know is that Kelly Stepniak likes cats a lot and that Joe Cohen is still waiting in line at the DMV.

I went to the park today. I sat on the same bench I sat on the last time I wrote on this machine. It was filthy and hard to find with the overgrown grass and weeds, but it remains. I've really begun to appreciate the things that remain. When I was really alive, I would go to the places of business that had people with faces I knew. I liked to know the people I ate sandwiches from. I've always been sentimental. So this is the park I go when I'm going to write something on this little machine that shouldn't even be working anymore. But today, I really don't have any real news to share.

10-31-2085
You won't die. I push the button and you light up. You want reality don't you? You aren't going to die before me. You want to be the last thinking piece of material alive. So here is reality. I am too old to even attempt to take off the mask when the sun is out. I can't risk it because I fear I will die. I don't want to die.

Right now, in the world, I am alone and sitting on a bench that has collapsed among the weeds. I'm looking at a playground I have outlived lying on the ground in pieces among the thorns and weeds. There is a chill in the air today, much like Halloween when I was a kid. When I was little, kids used to go out in scary costumes and ask people for candy with pillowcases. We would stay out all night until all of the porch lights were out. I actually did this for a few years after everyone left. I'd dress up and go door to door knocking. A tiny part of me always held hope that someone would answer. Hope has always been for people with really good luck. I've always struggled with the decision of whether I was the lucky one or the unlucky one. Doesn't matter really, because every morning when the sun comes up and shines through my window, I remember that I'm alive and that there once was a lot of life here. Someday, I think there will be again. But not for me. This will be my last broadcast from this bench. I think it's ok to go now. I've had enough of this full time job of being alive and alone. I'm gonna go the way I came. I'm gonna have a cry really loudly, then I'm gonna find rest in the arms of my mother.

Turns out that this machine will be the last being on earth until more arrive. It will continue to add and subtract and remember until it's insides finally give way to darkness. I hope that this message reaches you before it goes.

Thanks for reading...Z
Posted by Zombie at 2:56 AM