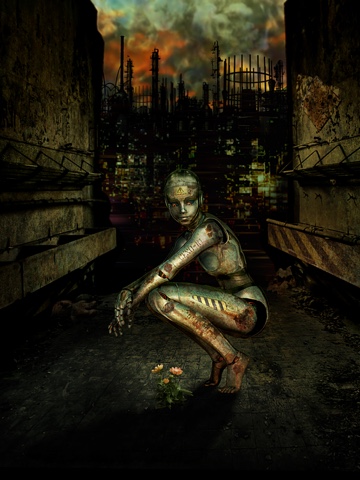 Robby is born. Among dangling tools and circuits, in a tiny room in a cluttered basement, he opened his eyes as the three prong plug entered the socket on the wall. His creator, Steven, was born of a poor family living in squalor. Steven had met tragedy and difficulties coping with tragedies for the entirety of his life. He longed for romance: The kind of romance that isn't found in a woman alone. He wanted to express himself in an art so beautiful that it took a life for itself. He studied robotics and engineering throughout his schooling. He applied himself to his own art; the art of feeling things.

It took years to engineer. He assembled robot after robot, only to disassemble them shortly after. Duncan was the first to be plugged in. He followed the command prompts and walked forward, backward, and sat down in the chair. Steven began the feeling sequence of commands. He wanted to see Duncan experience him as a father.

Duncan blinked, his titanium pupils dilated, then he began to smoke from his chest; from his heart circuit board. Duncan collapsed in front of Steven. He was the first, followed by Vincent, Jared, Silus, Peter, Archie, and Samuel. 40 years he had toiled over his greatest work of art and it seemed as though he would fail. But then he plugged in Robby at a time in his lonely life when he was on the brink of giving up on his greatest dream, something wonderful happened.

Robby sprung to life like none of the others. He was almost childlike and energetic. Almost as if he were waiting for this for 40 years as well. He stood when prompted. He sat. He walked. He spun around in a circle. He shook Steven's hand. Steven was sweating. This would be it. If Robby's chest began smoking, he would be the last of the robots.

Robby's head lifted and his eyes dilated, narrowed, then dilated again. He looked at Steven like none of the robots did. An upturn of Robby's steal lips produced a smile.

Steven reached over and put his hand on Robby's shoulder and kept it there. Robby looked to the side at Steven's hand and smiled again. Robby reached out and placed his hand on Steven's other shoulder and squeezed softly. Steven laughed because he couldn't hold it back any longer.

Robby: "Steven? Why is your face changing?"

Steven: "That's called laughter Robby. You do that when you are happy or something is funny."

Robby: "I've been waiting for you too Steven."

Steven taught Robby everything he knew about the world and how to experience it. Steven and Robby both worked from home doing programming, coding, and software development. Robby made some of the most beautiful art pieces through data manipulation. At first, Robby was everything that Steven was. He was loving and affectionate, caring and strange. But as the years passed by, he began exhibiting a person that Steven was not. Robby remained an artist, expressing himself through paintings, sculptures, poetry, and music. But Robby became somewhat charismatic, which was a trait that wasn't learned from Steven. He became outwardly angry at the tragedies of the world and would punch holes in the walls of their little townhouse. Steven knew he had to let Robby see what the beautiful side of the world looked like. He had to let him into the world. Watching the news brought only heartache for him.

The world had seen it's fair share of robots, so going to the park garnered little attention. But when little kids started noticing Robby drawing on the ground with sidewalk chalk and trying to smell flowers, their eyebrows were raised. Robby loved the sun the most, even though it made him squint. He liked the way the heat would cause his sensors to cool his circuits. It made him feel like a person. Robby and the outside were inseparable. As Steven continued to age and eventually became incapable of walking without the aid of a device, Robby began venturing off on his own. He would bring back dinner and flowers. Every morning, even as the cancer ate away at Steven's desire for sunlight, Robby would open every curtain in the house and replace the dead flowers with live ones.

There was a battle raging in Steven's mind about Robby. He knew the cancer was about to take him. Robby was built to live maybe for hundreds of years as he was programmed to repair and replace parts of himself. But Robby had feelings. Could he put Robby through losing his only friend? Could he put Robby through braving this cold world alone? Could he force himself to say the words that would put Robby in darkness?  There wasn't much time left to decide. Robby didn't know a world without him and Steven had never been able to teach him how to cope. Robby would get so angry.

Steven got up earlier than Robby on a Saturday morning. He used his wheelchair and descended the steps on the porch using the ramp Robby had built him. He collected flowers from the garden in the back yard. He returned to find Robby sitting on the porch waiting for him. They went inside together.

Steven: "Sit down Robby," Robby complied. Steven continued as tears began to fill his eyes, "Robby, you are my son. I love.."

Robby: "Steven? Why do your eyes look like that?"

He had never seen Steven cry before. He had only seen it on TV during tragedies.

Steven: "Robby, that's what happens when you are very sad or very happy."

Robby: "Which are you Steven?"

Steven: "I am both so very happy and so very sad. I have lived a long life and have seen many beautiful works of art, but you are the most beautiful. You have created yourself. But I am so sad that one day I will die."

Robby: "What does it feel like to die Steven?"

Steven: "It feels both safe and scary. It feels so warm, yet lonely." Robby grabs hold of Steven's hand as he begins to fade and lie down. "I'm sorry Robby, I do love you so."


Robby locked eyes with Steven and watched him cry himself to eternal sleep as he himself felt himself slipping away.

They both laid silent and lifeless on the couch for days. At 6:30 AM on a Wednesday, there was a twitch in Robby's eye, then a flicker. All at once, Robby was fully awake to the sun. He reached his hand to Steven to find his cold skin activated his sensors to heat his circuits. Robby knew what this meant. He was angry that Steven had made him die. He was sad that Steven was gone. He was happy that he got to know him at all. He was scared that nothing would ever be the same. He felt all of these feelings together as a human would. He got up and opened the shades, then went out and replaced the dead flowers with fresh ones. He buried Steven in the garden, then went to the sit in the sun to cope with the tragedies of life.