Little Lights on the Stables 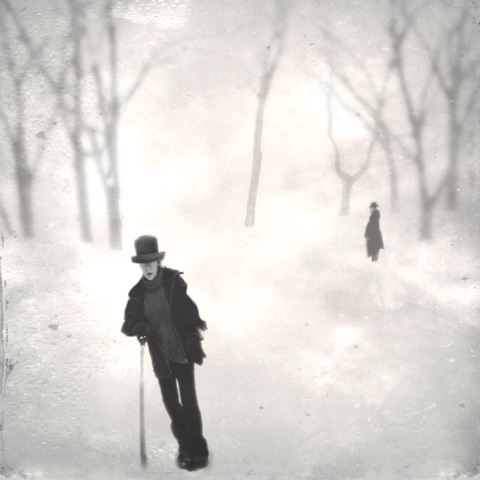 Elizabeth curled up into her sleeping bag as the midnight wind howled around the tenement building she lived in, sweeping through the trees and through the screen into her bedroom. She had always slept like this. She could sleep no other way. She only felt comfort when she was a few feet from the cold dangers of humanity, but safe beneath the iron armor of her sleeping bag. She winced her eyes and said a final prayer to God to give her parents.

She was the oldest child in the orphanage. She was fully aware of the statistics regarding her adoption chances at her age. She was whopping 9 years old; too old for a new family, but too young for the farmers looking for free help. Tomorrow, Betty and Jim Gustafson were coming to meet her. The housemother informed her that the couple was advanced in age and looking for a child that wasn’t incontinent or needy. Elizabeth fit the criteria. She had never complained about a thing and no one had ever seen her use the bathroom. She was shy and aware of her surroundings.

That night Elizabeth dreamed of her real parents. Really, it was more of a sleeping memory. They had left her at the hospital when she broke her arm after falling out of a tree at about 5 years old. Her parents were poor, and got often frustrated with the way Elizabeth would talk about her dreams and ambitions. She would neglect her chores to read about a boy that led all of the children out of a town that refused to pay him for what they had agreed to. They had tried to point out her hypocrisy by explaining that she was doing the very same thing to them that the city did to that pied piper. She continued to dream big and work slowly. One Sunday after church, instead of feeding the horses, she climbed a tree with a book about a little boy that ruled a world where kids got to do whatever they wanted. As she was reading, her branch broke and she fell to the ground.

The last she saw of her parents was in the emergency waiting room. The nurse told them they could come back with her, but they refused. When the arm was casted, no one came for her until morning, when a woman in a gray suit and a briefcase introduced herself. She always would wake up at this very moment and find herself sleeping in a small room on a metal bed, staring up at the curtains as they danced with the wind in the night. These nights always seemed the most silent. Nothing was ever going on to distract her from who and where she was. They were out there somewhere, and she was alone. She didn’t have the energy to perform any tricks for the Gustafsons. She came out and remained shy and aware.

Elizabeth stood at the foot of Betty’s grave freshly filled in. She was buried next to Jim, who had passed away 1 year prior. She thought about Christmas whenever she thought about them. They had always made such a big deal about this one holiday. Jim would string lights up on the front of the house, the garage, the pole barn, the horse gates, and even her room. He would play Bing Crosby records over and over and take her to see the reindeer at Zeke’s Farms every year. Betty would make Christmas cookies and put on these red and green elf tights before she passed out presents on Christmas morning.

Elizabeth had always believed in God because of them. Not only did they adopt her, they brought her out of her shell. They taught her what love that doesn’t leave felt like. She trusted them to never leave her. But here she stands, only 33 and alone again; an orphan again, with no one to love her.

She spent the next few months going through their things and sorting them out. She would pick up their clothes and smell them, then cry so loud without fear of embarrassment…because there was no one to hear her. Every morning, she would walk the same 3-mile route through the woods and dirt roads. Every morning, she would pass over this bridge that connected the two hemispheres of her town. She always considered falling off of it. She never did. Her belief of a God that loved her always kept her walking.

Christmas Eve this year was spent alone. Elizabeth strung up the lights on the tree and in her room. She sat down in front of the tree by the fireplace with a glass of wine… Then another glass… Then a bottle. She thought about the day she was brought home from that orphanage. They were stern with her. They told her the house rules and the consequences of breaking them. They promised to love her and give her all she needed, even through difficult times. She liked that they smelled like a campfire and drove a really old car. Elizabeth fell into a deep sleep beneath the open window of the living room under the Christmas tree.

Elizabeth opened her eyes to a different world. She was lying on the sidewalk beside the street. She was wearing a gray coat and worn out boots. Her hands were the hands she had when she was 5 years old. She was used to waking up being 5 years old again, but never in these surroundings. She surveyed the city. There were little children laying next to their mothers shivering and begging for food. There were also dirty little children jumping all around, playing street games like jump rope and stickball. As she walked, she watched a small child’s paper boat float away from him down the ditch toward the drain. Another dirty kid jumped out of the four square line and saved his boat from the drain. Everyone was helping everyone everywhere. It was as if no one were really alone.

When she turned around, she saw a child even younger than her feeding bread to an old woman on the sidewalk. The little girl was wearing red and green tights like an elf. Elizabeth followed her around all day, watching her feed the hungry, bandage the wounded, and hug the crying children. Elizabeth followed her all the way home to her tenement building. She followed her up the stairs and into her small room with a steal bed. The curtains blew in with the winter breeze. She pulled the blankets over her head and fell asleep smiling and content.

Elizabeth watched her all night. She didn’t move at all: She just slept. Elizabeth all of the sudden started crying. She tried to be quiet to not wake this little girl, but she had all of these guts that wanted out. She wept and thought of her mom…Betty, and her dad…Jim, stringing up all of those lights for no one to see but them. And her. She realized just then that they strung up the lights for her. They led her to where it was warm; to a place she would call home.

She woke herself up crying. She felt both profoundly sad, but also so profoundly thankful. She looked up at the lights and knew that she had always been loved.

When the sun would arise, she would drive Jim’s old truck down to the homeless shelter and spend Christmas feeding the people she saw in her dream.