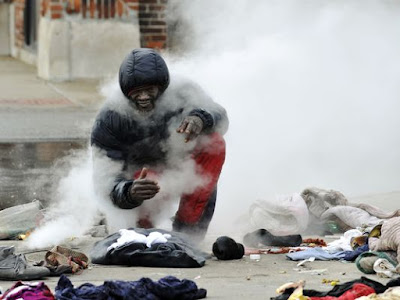 My friend Stacy posted a Story about her family and a group of people looking out for this homeless man in her community. The story made me smile. It's a story that reminds me that we are still connected despite our differences in opinion.

It reminds now as I write that God named Jesus Emmanuel... meaning "God with us." It was a sign that God was present in all suffering.

I wasn't a rookie to helping the homeless. I had heard the stories and the cues meant to manipulate. But when Paul sat down in front of me, I was speechless. I was shocked at what I saw and he was probably used to that. We looked each other in the eyes for a while. I wanted to cry. I didn't. Instead, I just asked him. I've never been a person for small talk. I asked him about his burns. Paul had no recognizable features on his face or body. His fingers were melted off and he spoke through a small hole in his face.

He didn't hesitate. He told me about the time his mother met this guy that made her whole world go round. He made her feel so special. She married him and soon after, the guy started beating on both of them. Paul said there was something empty about the guy's eyes.

One night after his mother had been beaten, Paul punched the guy in the face and told him that if he ever hit his mom again, he would be dead. The guy pulled back and smiled. But he left. This made Paul so happy to have helped his mother. That night, while Paul was sleeping, his step-father doused him in gasoline and lit a match. Paul rolled and screamed and tried to put out the fire that was burning him down, but ended up looking less than human. He lost the joy of being human.

The story made me sick to hear. It made me love him instantly. I put him in my car and drove him to a shelter. I bought him a bus pass and a phone card. I promised to help him. I promised to get him out of hell.

Over the next few weeks, I found him a job interview with a truck packing company and a half-way house to live in. I was so pleased with myself. I had done something good with my life...finally. When I bought Paul the phone card, I had asked him to call me every night to pray. I always felt bad for not letting him stay with me. The last night he called from Hart Plaza. He said it was so cold outside. I took the cordless outside with me and we both spoke shivering together. I told him about the interview and the half-way house. He was elated. He told me that I had changed his life and was so thankful to God for me. I went to bed feeling like a good person.

I told him I would pick him up from Hart Plaza at 10 AM. I waited for over three hours. He didn't show up. He never called me again, despite having that phone card. He was ghost.

I can only pray that he is ok and living well. I pray he found something that made his life worth it. But all I can really think about is how cold Hart Plaza has been the last few years. I truly loved Paul and I think he truly loved me. Despite the separation, we are all connected.