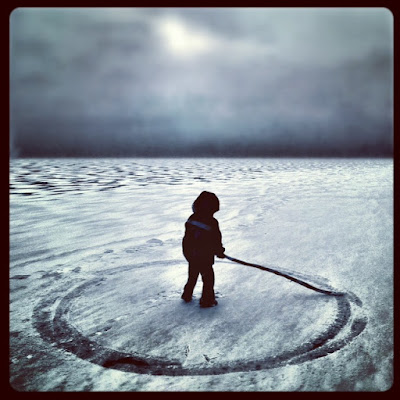 "Have you ever wondered what your last moment of life would be like? I have. Now I know." - Micah McBain

I used to work at a steal mill. My job was to clean the steal slough of the machines with a torch, then clean and repaint the molds that came through. It was hard work for very little pay. I'm not an idiot and this is America. I left on a Sunday morning when my alarm clock went off to get up and go to work. I went to church instead.

So as I lay here on these tracks, I wonder if I had cleaned the machine that made the cold October steal beneath my neck. If I didn't, someone else did. That person had no idea what would happen. The thought of that random person gives me comfort for some reason. We are best friends and he doesn't even know it.

I was a kid, no older than 11 or 12 years old when I left home. I won't make a short story long, so I'll get to the point. While I was sleeping, my drunk of a dad got drunk and let other men come into my bedroom for money. When daylight came and everyone had left, I took an ax and separated his head from his disgusting body. I called the police myself.

They tried me as an adult, placed me in a juvenile facility until I was 18, then transferred me to a federal penitentiary. One year ago, I was let out of prison after a total of 26 years in various prisons.

I got out. No one hired me as an ax murderer. I dated, but no one married and ax murderer. I went to church, but no one baptizes an ax murderer. I ended up sitting at the end of the bar, staring at various vices that I asked them to put under my nose. I did crappy work for crappy people. I spent it all on whatever I wanted that day. When a person has nothing; they have nothing to save for.

My mom left me when I was a toddler. I didn't know anything about her other than what my piece of crap father told me about her. So I guess I didn't much care growing up what had happened to her. My father told me she left us both at the Tiger's game when she got up to use the bathroom. I do remember the foam finger. I do remember that Tiger's game. So it must have been true. During my life in prison, my aunt sent me a letter. The letter was return addressed to her, but my mother signed the letter.

My mother told me she was sorry. It wasn't her intention to leave me with this animal. She was being hurt by him. She had tried to get me out too...several times. When she left at the baseball game, she had tried to take me to the bathroom with her and my father told her to leave me be. She had tried to kidnap me a few times, but had failed. She told me that she drove by all the time and watched me play at school and in front of my house with my friends and that I looked happy, so she gave up trying. She just wanted me to be happy. She told me that she would have liked to trade places with me.

I tore up the letter the moment I finished reading it. I got into a violent fight that day and ended up in isolation with 65 stitches to my face and hands. My"aunt"sent me letters throughout my sentence, but I never opened them. Every time I got one, I would get into a fight and end up alone.


I think they must have gotten tired of the fighting, so they let me out on parole. If good behavior means spending almost as much time in isolation as general population, I guess I was that guy. I left the prison on a Wednesday morning at 6:30 AM. There was no one there to pick me up. I called a cab and waited. I left the prison porch at 4:15 PM and slept at the Day's Inn.

I tried to make it work. The thought of being free both excited and scared me while incarcerated. I've been here now for 5 months and haven't experienced any excitement. I'd tried really hard to make it work. I shoveled snow, raked leaves, dug holes, carried timber, broke fingers, lost weight, and still ended up laying in an alley in a shelter issued sleeping bag. It's impossible.

The nights were long, but the days were the worst. At least at night, I could alternate between a shelter (when I could find one) and this small area in the alley behind a huge factory that blew it's hot machine exhaust into the air through these huge tubes. The days left me with nothing to do but ask for charity...something the world will give only in cancer patients and car accidents.

So I decided to leave. I realized that there wasn't a single thing I would miss. No one would miss me either. I was an ax murderer. Everyone wanted me dead anyway.

So here I lay on these tracks. I thought about my dad and my mom. I remembered one day that I was happy. We were at Chucky Cheese for my birthday. My mom and dad were smiling and giving everyone tokens. These stuffed machines were playing fake music through fake instruments and I could not have been happier. I opened my presents and didn't even care what I got. For this one moment, I got what I had always wanted.

I walked 3 miles to get to the tracks. This was a busy rail, so I knew it wouldn't be long. No one wants to lay there waiting all night thinking about it. When a person does something scary, they have to do it fast; because it's hard to go through with it.

I stared at the stars as a man staring at the sky for the last time. That night, I ate my favorite meal; cheese ravioli and garlic bread. I listened to my favorite song on repeat and just waited for the horror show to be over.

After many meaningful moments, the tracks began to shake beneath my head. I turned to the right and saw my assassin for the first and only time. He was hooded in a dark shroud of steal and gears. I turned my head to the sky to keep my focus on the stars and not my fear. The shaking got stronger and my nerves couldn't handle it, so I shouted into the air as loud and as hard as I could. I would keep shouting until it was finally over.

A piece of paper floated over across my eyes and landed to the left of my face. I was annoyed at first, that something was grabbing my attention away from my own chosen last moment thoughts. Then I got so annoyed that I grabbed the paper and looked at it.

It was a colored picture of a small child, by a small child...handing a yellow flower to a woman who was bleeding from her face. The bottom had a caption, written "Becuze i love u."

I rolled off the tracks as it's blades blew wind onto my back. I laid there weeping all over the picture. I knew it couldn't have been an accident. Someone loved me. Somewhere. That was enough.


(Part of this story was told to me by a person I cannot find in this world. The picture and tracks were his story. I filled in the blanks.)