The Truth About Suicide 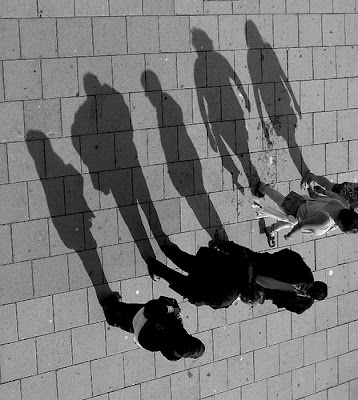 The guy with the saxophone played in the park when I should have been in school. I really can't remember why I wasn't there that day or why I was allowed to be at the park next door. Sometimes I faked being sick. But in those times, I was confined to the couch with the television. Sometimes my mom would give me a 'Mental Health Day." This is a thing that was exclusive to her at the time and to this day I believe whole heartedly in it. I do it for my kids. If I see my kids struggling or really emotional, I'll call them off and we will go to the movies. It may be because I'm a big kid, but I remember it helping me a lot as a kid, and I suppose it helps them too. Sometimes we all need to take a day off for no reason other than to take a deep breath and relax.

This day, I sat on the ground in front of the sax guy and listened to him play while everyone else was in school. I didn't have money, so I assume that's why he never asked for it. What he gave me was terror. This dude told me of nuclear war. He told me that Detroit was a huge target because of the nuclear power plant in Monroe and the auto industry. He told me that if the bomb hit, we'd be dead in15 minutes. That day started my obsession with death. It made me think about what it would be like to die. A couple years later, a classmate and football team friend would hang himself at 12 years old. I went to the funeral and looked at his dead kid body. I had never seen a dead person that young. We always went to church growing up, so I saw a lot of old people from church that had died. It didn't bother me. They were wax figures to me. This kid was different. I remember my mom giving me at least two mental health days after that. I went back to school after the weekend and the counselor was still there trying to get us to talk to her about it. I came home so full of sadness that my mom asked me what was wrong and I could not help to burst out weeping. She held on to me on the couch and said nothing. She just let me feel it. Kids told stories of why he did it, and conspiracies floated around of foul play. Reality was that this kid didn't want to live in this world. He was profoundly sick and he tapped out.

I went through a lot of bad things once I started growing into a man. When you stop playing with action figures, you start seeing the world in the way it really exists. I realized that I was missing a dad I had never met. I started fighting and blaming a mom that was doing her best. I kept obsessing with death and the act of dying. I just couldn't fathom having the balls to die. I wasn't so happy with life, but no where did I have the guts to die. Many think that those that kill themselves are cowards. I think those are people that never found themselves on the brink. Those that have been there and have survived it know that it takes a lot of courage to just go. I'm not condoning suicide. I could and would never do that. But I don't think people understand what is actually happening in a person that has had too much and is going to go. I understood it the day I tried to leave as a teenager. It wasn't a cry for help. I had done my research. It wasn't me looking for attention because I got plenty of that, I have always gotten attention. It was illness. Something close to cancer, except it kills you slowly and no one wants to admit you have it.

Dying from cancer is awful and everyone accepts it. Dying from suicide is awful and everyone thinks you were a coward. It's not true. It actually takes a lot of guts and hopelessness to kill yourself. Most people try really hard to get better and find a way to be happy. Happiness is just on the horizon for some people, but not all. We don't live in a movie world where the happy ending is just on the other side of our pride. Sometimes, we suffer and pray for help and no help comes. Sometimes we give all we have and can't find the answer, even if it in front of us. In those times, we lose hope and go away from the ones we love. They aren't cowards. They aren't selfish. They are sick.

I used to be a youth pastor for this reason. I worked with teenagers for 13 years. My passion was for the truly broken kids. For kids like I was. I did well at my church. I attracted a lot of hurting kids and many of them are happy adults now. But I also watched many of those hurting kids become even more hurting adults. After Will killed himself, I lost my passion for hurting people. I wanted to quit. I couldn't do it anymore. The kids hurt me when they circled the drain, but watching one of my best friends do it destroyed me. I resigned. I started trying to help people from a different perspective as a nurse. I watched people die, and again they were just wax figures to me. People learn to disengage from reality to survive.

It's easy to look at our culture right now in America and lose hope. We argue and get angry over the stupidest things. It seems from my point of view that we fight for things we may not even know enough to actually believe in. We label each other. We judge each other. We hate each other for our opinions. We celebrate hatred. We fight intolerance with intolerance. We kill in God's name. We hate in God's name. We do both in the name of our denial of a god. We don't apologize when we are wrong. We don't help each other when we are in need. We don't empathize with anyone.

To me, this world appears to be hopeless. I guess that is why the suicide rate continues to climb. Everyone needs love and there are so few giving it. If we got busy loving every time we got angry, I think we could actually make a difference.

I have hope. Despite any death I've seen, I've seen more life in my wife and kids. They are hope to me. I watch those that do love for no reason and it makes me smile and want to stay. Kindness makes people want to stay, despite their sadness. Hatred makes people go away forever.