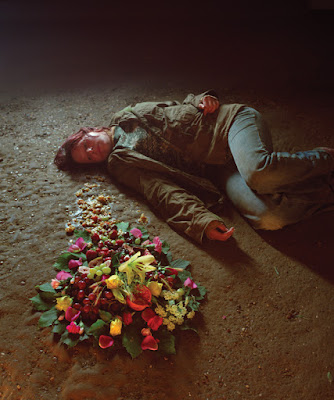 Which is worse; losing the guys you grew up with, or losing the God that has been with you all along? Anger and negativity mutes the colors of everything around you. Things seem darker than they appear because that's the only way you know how to see them anymore. I've never been a person to hold grudges...at least not up until 5 years ago. I could forgive so easily. This isn't the case anymore. I find myself writing people off before they ever get a chance to prove my pretentious mind wrong. It's a pretty sad state to be in. It isn't what I should be. I am nowhere near who I should be. I've been given so much and yet I cannot shake this resentment and anger. I have been given every reason to believe that God exists and loves me dearly. I know the facts of the matter. I know what He did and what my friends did. I know that God grieves with me, both for them and for me. But I cannot divorce myself from the feelings that God simply isn't fair and doesn't appear to have ever been.

It isn't fair that I have always believed I would lose half of who I am. I told my wife and I told my brothers that I felt something terrible coming a decade ago. I felt it as a kid. I always felt this dread of the future and hopelessness. I felt like nothing good could last. I know this isn't true as I look at my family, but I also can't help but be angry because two very significant people aren't in the car with me rehashing old stories and visiting stomping grounds. They aren't doing anything on earth at all and that pisses me off.

I feel like in some ways I am starting my entire past over. It simply isn't fair to give a person all of these great memories of being a teenager, then take away the very people you wish to share them with. I drive past places that great things happened and I want to call Will. I want to call Joe. I want to laugh about these crazy memories, but I can't. So these memories bring me sadness. They are like a thousand little ghosts that haunt everywhere we had been...the very places I still reside. It's just not fair.

I know I am whining. This is the paragraph I dedicate to reality. God is good. God doesn't kill, sin does. Evil took my brothers, and mental illness. I have the most beautiful life. I still look at my wife the same as the day I met her...in complete love. I am breathing and my heart still beats. I am very much alive and happy to be. God doesn't cause terror. God is all knowing and powerful, but He doesn't deal in mind control. We aren't perfect and He doesn't force us to be. This is the very thing that attracts me to Him in the first place. I am not perfect and He loves me. How can I blame Him for not preventing mistakes from people I love. God never promised me or anyone safety. In fact, God promised persecution and sorrow.


I don't write much like this anymore. I would rather mask these things into short stories. But I read something I said here years ago and it was a promise to never lie to you or myself. I wanted my life to be transparent. I have been anything but transparent lately. I have been hiding everything. This isn't who I want to be. I want to be the guy that has no secrets and the guy that people want to be around because of his honesty. So here it is. I am broken. I am confused. I am angry. I am sad. I am lonely. I want to feel the warmth of God again.