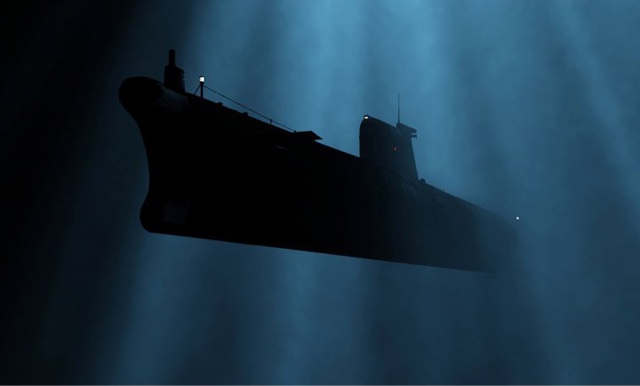 The eruption occurred without warning. I was thrown from where I was lying into the side of the hull, then jerked back left into a maintenance closet. Sparks and small flames lit up what little I could see. No time to think about anything, I just started wriggling out of a labyrinth of wires until I was too tangled to get to my feet. My legs felt weak and my arms hurt on both sides. I was bleeding as far as I could tell from somewhere above my eyes as I felt the warm trickle of vicious fluid roll off my brow. The ship settled. "No submarine!" I remembered.

"I am Victor Gost. I am in the United States Navy. I have been on this sub for 2 years. The president is Kellen Murphy. The year is 2033." I continued to reassess my brain function. The bleeding had stopped and the hull also free from leaks. I regained my composure and emerged from the wires and out of the closet. My legs were still weak, but I managed to crawl to the sub window by the fern garden and pull myself to my feet. I looked inside and the room was bursting with green so dense I couldn't see beyond the plants to the other side. As far as I remembered the seeds were planted only a few days ago. I could be wrong.

I made my way to the corridor 23 and entered with my keycard. I approached the wooden desk next to the hull window and peer outside into the abyss that has become my home. The water was dark and it appeared the lights from the sub were cut off. There were no fish that I could see, which was wasn't a rare occasion, but it wasn't frequent either. The fish always tend to hang close to the sub to ward off predators. I couldn't see anything that would cause such a jarring blow from that angle, so a moved to the other side of the corridor and looked out the other window. What I saw, not a single person would have believed. I had smashed into and through the hull of a sunken ship. There were old plates and chairs floating around the water, still held up by the sea bottom that was stirred up and roaring from the ocean floor.

I made my way to the control room to find Captain Denning. As I progressed to Sector 1, I noticed the lack of officers. I noticed a lack of anyone at all. No rattling, no talking, and no radios. I noticed silence, save for the hum of the engines underneath me. I passed the specimen lab, then the mess hall, then the latrine...no one stirred or made a single noise. I felt all of the sudden lonely. I reached Sector 1 and entered through a door rarely left open. No one. Nothing. The lights on all of the panels were lit with their normal colors and the depth screen was accurate to the sea floor. I sat down at the communications desk to go through the manifests. In the cabinet was a hard drive. I plugged it in and saw Captain Denning on the screen emaciated and pale. He was crying and apologizing. To me.

He said they tried to get me out, but they were too weak to lift me through the airlock. He said he was sorry he gave me that order. Then he said goodbye. The video went to black and the time stamp lit up November 5 2034...nearly a full year since I can could remember hearing a date. I played the next video, then the next, then the next. I played 5 terabytes of apologies and goodbyes. Most felt guilty for the war. Other's just lamented about the smell of flowers and the taste of real meat. I traced the videos backwards and watched the men grow in weight and shrink in facial hair. When the video footage was finished, I opened the second file on the hard drive labelled "Media." I spent the better part of 2 entire days watching the footage. I could not believe what I saw. We, the Americans, launched a nuclear missile from a submarine (which I now gather was me and my crew). The missile struck France and obliterated 5 entire cities. In retaliation, Germany launched, then Iran, then Israel. The entire world was shown in pictures flashing across my eyes. Everything was melting. The final transmission was made by a man who spoke gravely alone in a studio. His eyes were sunken in and his skin sloughing off. He spoke about the end of civilization and sounded much like my crew in their goodbye videos.

I closed the file and opened the third and final file on the hard drive. It was labeled "For you who remained." It was a video dated the same day as his last, of Captain Denning, again emaciated. He explained what happened to me in case I ever woke up. He explained my demise to no one in case I slept forever. I had tried to kill myself. The order was given from Washington to launch the missile. I am a bombardier and I pressed the button. I can't remember it or what happened after. He guessed I had gone crazy over it. I took all of the pills I could find and fell asleep. They resuscitated me. The crew medic diagnosed me with anoxic brain injury with a guarded opinion on whether I would ever wake up. He told me they were all going to set themselves free into the water. He was very sorry they couldn't bear my weight.

I recovered my legs and toured the ship. I cut down the pants, devoid of any edible fruit and waited to die. I got hungry, then more hungry. I saw my reflection in the mirror and didn't recognize who it was at first. I shrieked and almost spoke in excitement at the stranger. Maybe I wasn't alone! But he mimicked me perfectly and I knew I was alone and would die alone. I was the last man on Earth and I was in the sea.

He pressed stop on the controller after rewinding the video a dozen times. "This is our father," he tells Lincoln. "This is our father!" "You heard him say that?" asks Reagan. "He just said he was the last man on the Earth. He didn't know about Roosevelt or Liberty!" He is our closest relative to what was before. Do you get what this means?" asks Lincoln. "Enlighten me," replies Reagan. "It means we have the answer to what happened to humanity! We know what they looked like and we know about the bombs, but we didn't know about their desire to die," says Lincoln. "This answers why they killed each other. They all wanted to die," continues Lincoln.

Washington walks into the room. "Why are you guys watching that video again? You're 9 years old," he says. "Dad, you kind of have to watch the videos you are supposed to be writing a report on. This is fascinating. This is my connection to 15 centuries separating me from this man in this water vessel," says Lincoln. Reagan rolls his eyes. "No son, it is a video found before the beginning of our time about the death of their time. It means nothing more than our ancestors all killed each other and this man died in a boat hundreds of feet under water all alone because he he followed an order and pressed a button and ruined our planet," says Washington. "This isn't a connection to the past; it's a lesson to be learned from fools. While he starved to death and rotted under the sea, two toddlers placed in a bomb shelter with canned food and bottled water grew and had children. Their children had children and no one has shot a missile in centuries. We learned from idiocy. That is the only connection we have to them," he continues. Washington turns off  Lincoln's computer and pats him on the head. "Let's go see what your mom has made for dinner."