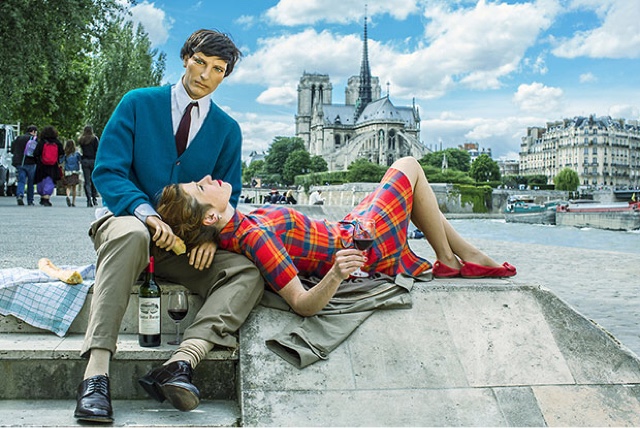 "I NEED OUT NOW! I have an appointment," he shouts as he bangs on the door with his fist one last time. He hears nothing in return from the halls. He slides his back down the large white door that separates him from the silence in the hallway. He traces his finger over the outline of his name on his facility issued pants. He mouths the words as his fingers sweep across: "Graeme," he says under his breath. It's been a really long time since he has considered himself an individual, he considers. He punches the door one last time in defiance behind his head and hears only the echo of his wailing.

Graeme was sent to the Beacon Institute two summers ago when he drove his car off of a ferry headed from New Jersey to New York. He had always feared tunnels and bridges, so the ferry was his commute to and from work. This day in his history, he felt "somewhat strange" waking up. He got on the ferry to Jersey, sat on the 67th floor of the financial building, and ate a cheese sandwich he had purchased from the truck out front. He typed feverishly into his computer. He had this strange habit of faking suicide threats on unrelated internet forums and chat threads.

"I think I'm ready to go through with it," he said on a video game review thread of the latest Call of Arms installment. He continues, "I'm going to jump off the top of this building. No words are going to make me chicken out this time." Later after lunch, he posts onto the social media page representing the cereal maker advertising a "Blend of happiness, with a touch of fire." He writes, "This blade feels hot under my chin, I think about the Joker and his permanent grin."

He left work and headed for the ferry at 4:00 PM sharp. By 4:47 PM, he was rocking back and forth from the waves dancing with the boat underneath his car. He didn't know why he did it, but he turned the key and pushed the peddle, smashing through two railings and into the water. He left his car and swam for shore. Police were waiting when he finally arrived.

Lying under Graeme's bed are the skeletal remains of rats and various bugs he has trapped in his cell and eaten over the course of the last 15 days, give or take. He is tired of being neglected and has made his decision to break out. He stands and moves to his bed frame and begins tearing it to pieces. He takes and uses the pieces as pry bars for the door, but never budging the door a bit. He begins beating the door with an aluminum bar that formerly served as a leg of his bed. He beats the door until his hands bleed, continuing to shout curses at the silence that lurks on the other side. No reply.

After a few hours of work, he gives up his anger and motivation and drops the aluminum onto the ground. The metal makes a sound that produces an echo from the outside of the door. "Emptiness leaves echoes," Graeme thinks. He takes a look at his hand as it reaches for the doorknob slowly. He takes hold and feels how very cold it is from his side of the door...the loud side. He pivots his wrist and to his surprise, the knob turns and the door creaks open. He shakes his head and chuckles once, then shakes his head again.

Graeme Clay steps out into the hallway and attempts to look around. The lights appear to be out. He walks left to the door that opens up the block to the mess hall. It should be locked, but it isn't. The lights are out in the mess hall as well. He finds his way to the office suites, then to the visitors waiting room...all doors that should have been locked. He reaches the back visitor entrance to the building. There is no guard, no receptionist, and no visitors. He pushed the little iron bar in and the door swings open and gets caught by the wind which blasts it open too quickly and gets away from him. He squints as the sun beams through the door. He has wanted to see the sun for the better part of two weeks, but for now, he wishes it were dark so he could see.

After several moments of adjustment, wondering why it was so windy and imagining stepping back into his old life, he takes his first step into the sun. He sees no one around. There is a parking lot full of vehicles, semi-trucks, and people standing all around very still. He hadn't seen or heard anyone in the building, but then again, it was too dark to see much of anything. Graeme walks over to a woman who is holding her son's hand while walking toward the visitor entrance. Neither of them are moving and she is off balance, but not falling over. He looks her into her eyes, which look dead to him. "Ma'am? Hello?" He waves his hand in front of her face and then in front of her son's. There is no response from either. He walks a hundred feet and repeats his greeting to the man who appears to be painting new lines on the parking lot. He isn't moving either. No response at all.

"What is this?," he asks himself. Then as if he were awakened by the sound of someone saying his own name, Graeme thinks, "Emptiness leaves echoes." The sky immediately changes from one color pattern to another and he quickly realized that it is him that is controlling the changes. He looks at the tree in front of him and bends it down from the top with his mind, then releases it, sending a truckload of apples into the sky. They go straight up and do not return to the earth. Graeme laughs and begins running at a pace faster than sound. As he runs, letters starts falling from the sky to the ground and bouncing in front of him. He sees the name of his mother and father drop, then his own name. He stops suddenly. Something feels different inside of him. The sky clears of all color, then the ground. Everything turns an eggshell white in front of him. This was a feeling he had never before had in his life. This was freedom.

At this very moment, in another dimension, a man with a large white beard sitting in a creaky wooden chair, drops his hands to his side and keels forward, bouncing his head off of a type writer. His chest neither rises nor falls. The rhythm in his chest goes silent, and all of the characters in his head are freed.

Thanks for reading...Z
Posted by Zombie at 2:03 AM