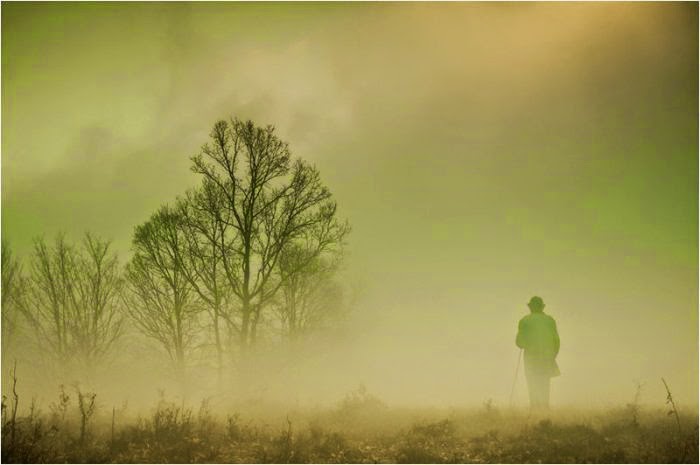 Jake rubs his eyes as the light shines in sharp beams through the cracks in the blinds. The room is white, made whiter by the light. It is morning and Jake comes alive to the weeping of his alarm clock. It is Saturday, but Jake has resigned to getting up early and going somewhere he can't remember right now. Sarah walks in from the bathroom in a towel. She has always been a morning person. Down the hall, he hears kids shouting and giggling, much like the sounds he would hear from his desk chair in his classroom during his student's recess.

For no describable reason, Jake feels different today, better than before. He gets up and takes a shower, spending a little less time under the water than usual so he can grab his kids. He dries off and dresses, then heads to the kitchen where Sarah is cooking eggs. Amy jumps from the counter as he passes on to his shoulders and he almost loses her as he tries to regain his balance. She is giggling. He tells her, "Amy, don't do that, you could have fallen." Jake grabs her and squeezes her as hard as he can remember doing so. Johnny comes running from the living room and says, "I'll be your Huckleberry" and slams his fists into Jakes testicles and sends him and Amy both to the ground.

Jake writhes on the ground, half laughing and half crying. He remembers why. It was Jake that watched "Tombstone" with the kids. They knew it was his favorite part of the movie. "I'll be your Huckleberry." Perfect. The kids piled on top of him as Sarah watched from the stove smiling. She didn't approve of him letting them watch that movie in the first place. "They are 4 and 3", she told him.

Jake regains himself and hugs on the kids on the floor for a while, then gets up to reach for his wife. She smells like flowers today. Her face is pale but glowing. Her eyes are blue and reflect their color onto the counter. She is beautiful. He wraps his arms around her and she turns inside of his squeeze to face him. She places her hands on his face that needs a shave and stares at him. She looks right inside of him as if he were something other than human. She sags her eyes a bit as if there were a sudden tragedy. She continues to stare. He doesn't have any words to say. He keeps trying to speak, but he is finding no words coming out as hard as he tries to force them...only air. She opens her mouth and says...

Wake up sweetheart. Wake up.

She walks from him and he feels his grasp release without him knowing. She walks down the hallway toward the bedroom and disappears from his eyes. Jake tries to follow her, but can't seem to move his legs at all. She moves with such grace, yet he is working so hard to move 12 inches.

Amy runs over to him and grabs on to his legs and squeezes. "I love you daddy," she says. "Take me to the carnival?" She reaches her arms upward to his face. Jake reaches down and lifts her to his shoulders. He has never said no to her. She hugs him and whispers something into his ear.

Johnny watches all of this from the corner of the room. What he is seeing isn't pleasant for him. He gets angry when anyone tells dad to wake up. His dad should sleep. When Amy speaks to Jake, Johnny darts off into the hallway in a fury shouting "Stay asleep!"

The shades are swaying in the wind next to the open window. Next to him is another pillow and cold mattress. Down the hall is silence and he remembers again. The silence always reminds him of emptiness and emptiness reminds him that he is alone. Jake sits up for a while and showers. He dries off and goes into the kitchen and cooks some eggs. He puts on his shoes and drives to the event he set his alarm clock for.

She looked paler than usual, but beautiful as always. She looked calm and hopeful. He looks to Amy in the box next to her. She looked like she was smiling a little. Then he looked to Johnny, who didn't look to be at peace. He never did. He was always angry for no reason. Jake used to sit with him in the corner when being chastised and just look at him in the eyes. After a while of staring, Johnny would smile and so then would Jake.

People kept hugging Jake to try to console him, but his face was blank. He didn't need consoling; he didn't need a hug. He needed them to leave him. The day was long and exhausting. Jake felt really bad for Sarah''s mom and dad and her family. He felt bad for his mom and dad.

When the funeral was over, he spent the night with his brother, who was his very best friend. They drank until they couldn't speak. Jake left the next morning and went home.

The problem with home is that a house doesn't equal home. He knew the dreams wouldn't stop. He knew he couldn't keep trying to sleep here. He worked at breathing for the next two weeks, then hopped on a plane and flew out to California to see his brother for a while.

While he was there, they spent the days doing wonderful things. Jake had ideas of what to do and his brother followed the lead. Jake's brother saw him as happy as he had ever seen him. They gambled and laughed and drank and cried. They spoke about old times when they were mischievous kids. Jake gave his brother his wedding ring one night when drunk on the beach. His brother refused it.

Two weeks later, Jake hugged his little brother at the airline terminal as tight as he could remember hugging anyone. Both looked at each other as if something weren't right, but they both knew that nothing was really right. Jake marched off into the tunnel and his brother to his car with tears in his eyes.

After a few minutes, Jake reversed his steps and headed back to the lobby area. He headed down the halls to the car rental company and rented a small sedan. He put his bags in the trunk and drove off.

He made it a road trip. He stopped at road side stands and bought chocolate raisins and cherries. He stopped at cavernous areas to shout into the air. He stopped at the Mining and Mineral Museum just before heading to the Grand Canyon. Jake played a disc of his favorite songs on his MP3 player and sat on his hood in front of the most vast and beautiful expanse of nothingness he had ever witnessed so close. Jake took out his keys and dropped them onto the front seat next to a letter addressed to his brother.

Jake looked in every direction as if he were taking a photograph. He smiled and breathed in the biggest breath he had ever taken and pushed off of the lip of the canyon shouting into the sky for the last time. He shouted until sound could no longer be heard.

His brother wakes at that very moment in the night as if someone had shouted his name. He looks around breathing intensely and his eyes reach the answer. On the nightstand was Jake's wedding ring.

(Don't read anything into this story. It was a dream I had last night and it stuck with me. Sometimes dreams leave you exhausted as if you didn't sleep at all.)