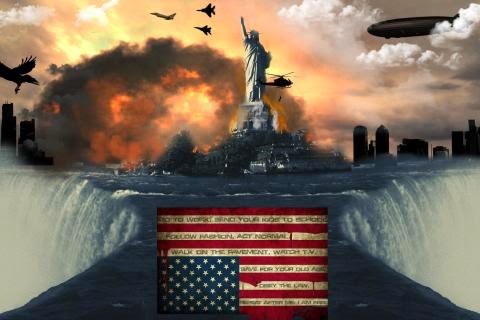 There was a horrific explosion. The entire city of Chicago set on fire as it's inhabitants ran aimlessly through the streets. Some were covered in blood and others cradling their children. All of them covered in soot. I was a little child then. I was playing in the park with my mom that sat on a nearby bench, watching my every move. I remember thinking that it was so rude to stare, and yet this was her habit whenever I was any distance from her at all. There were three of us on the tire swing being pushed in circles by one of their fathers. We were laughing because of the feeling we all got in our stomach's when this kid's dad really applied himself and pushed us hard. I would close my eyes and feel the wind pass through my hair. It was a moment of peace.

Then the boom and the crash and the flash of every bright color. The noise was too loud to be distinguishable. My ears started ringing and I couldn't  hear anything over it. I sat swinging for a moment, looking over my shoulder to the inferno that was my home. I hadn't even noticed that the swing had slowed and no one was there to push us anymore. I had a sister that went to school in the city...the one that is on fire. My mother grabbed me from the swing and we ran toward the place that everyone was running from.

We got two blocks before I felt the heat from the fires. It got so hot that we had to stop moving forward. People were burned badly and bleeding. One woman was offering us a taste of her bread and held her empty and charred hands to our faces. A mother holding her legless little girl stopped to ask us if we had seen her daughter. My mother said no, but covered my eyes. Then we saw this old woman. She was walking away from the rubble calmly and without damage or expression. She wore clothes that looked like my 1st grade history book pictures. She wore a bonnet and large dress with fray and frills all around the bottom. She walked past us speaking under the noise to no one in a different language. She walked past us and into the dust cloud behind us. My mother didn't even look at her, but I watched her disappear into the soot and ash silently as if she were a fish that poked it's head up out of the sea and retreated back into the deep.

The fog cleared and the rubble was removed. 2 million people were estimated to have died. There was never a count, the fire had done too much damage to decipher identities. People moved out of Illinois. This was the only city in American history to burn down twice. People began to get the hint. Rumors began to spread that connected the two fires. The first was rumored to be started by a meteor, despite the official cause to be a cow that kicked over a lantern in a barn. The second was rumored to be aliens or even the devil. "There was something about that city," they would say. "The entire city is the gateway to hell."

People grew hysterical and the government has always been comprised of opportunists. They used the fear to control everyone. After-all, it couldn't have been a lantern this time.

They came up with the idea of a plan that never existed and fed it to the people of the entire world. The plan? The government knew how this happened and only they knew how to fix it. Safety was focused on reliance of the government for information and action. The people got no information, but they got plenty of action. The new American government routinely launched missiles into cities and decimated millions. They would then explode their own missiles in the air to show the world that they were winning the war against whomever was fighting us. One lie leads to other lies.

My name is Graeme Brown. I have a wife named Elizabeth and a daughter named Reagan. This will be my last entry into this diary. For those beyond the sun, fight until all glimmer of hope is gone. Fight until there is nothing left.

I sat in my living room with Reagan, William, and Elizabeth. I pulled out a board game earlier in which we are now at a stalemate. Reagan looks at me to concede as usual. She is competitive like me and has grown accustomed to me losing to her. I smile. Elizabeth drinks a sip of wine and stares into the fire that dances under the brick mantle. Reagan moves her last piece into a bad position that would usually make me gasp in bewilderment and act as if she got me. This time, I smiled. I made my last move and she has fallen. She looks at me surprised. She isn't used to losing. She says, "Did I lose?" "Yes," I say. Her eyes tear up and she looks away from me.

As a child I was accustomed to losing everything. I was small for my age and not very smart. I always took the chance and ended up defeated and laughed at. This drove me to the point of insanity. If there were something I couldn't do, I would embarrass myself until I could. I was always a loser in the great contest of life. But these two people were my only and greatest conquest. I achieved true love; the kind that loves you back. Reagan whimpered and whined at me for a moment and then sat on my lap and buried her face into my chest. Liz just looked at me as though she knew I was being manipulated again by this irresistible child. Reagan was a daddy's girl. We sat and read a book aloud. Reagan had gotten quite good at reading, so she led the story tonight. She read while we corrected her and she read more until the door busted open.

Soldiers rushed in, subduing the three of us with machine guns. I asked important questions, but they would not answer. They stood us all up in a circle, looking at each other. Reagan's eyes were full of fear. They were full of asking me to save her. Elizabeth only looked at Reagan. "Graeme Brown?" "Me, that's me, what do you want?" I say. The first of the three guards snickers at me and says, "We want her," then pointed to my wife.  They held us down with their guns. They raped her and shot her in the head when they were done. William, my son, just a teenager rushed toward them, competitively like his father. They hot him with their guns until I could no longer recognize him and I watched the rise and fall of his chest halt. They stood me up, still in front of Reagan. I tried to hold myself back to save my daughter. I stood up straight and let my guts bleed from within. They asked me again, "Are you Graeme Brown?" I said, "yes." The soldier that held on to Reagan then threw her into the fire place that burned hotter to me than the day I watched the second Chicago fire. I pushed forward to meet the stock of a gun and went to sleep.

Thanks for reading...Z
Posted by Zombie at 1:37 AM