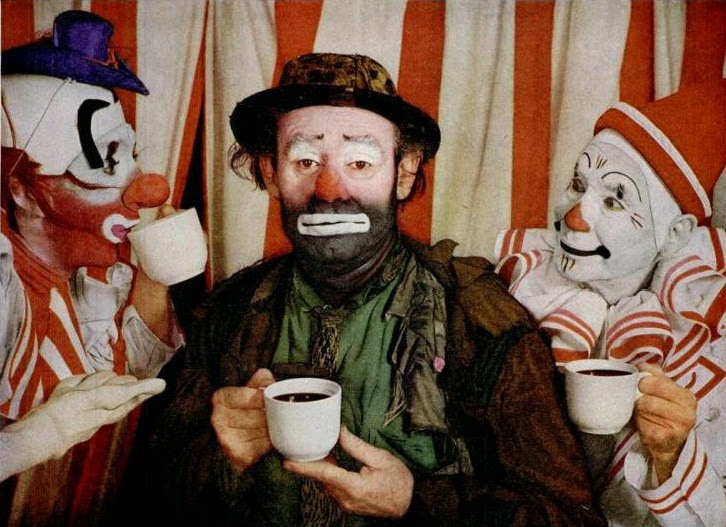 I have always had a thing for clowns. They are both idiotically happy and so awfully sad. My mother had a thing for them too, I think for the same reasons. She collected Emmett Kelly figurines that lined a large glass stand in the corner of the living room. I didn't understand why she liked them so much until I realized I had been in childhood ignorance until my late teens. One day I woke up and realized I was a clown. I learned how to hide everything.

A few years later I was in a bad place. I was profoundly lost and had given up. I started to paint things on the walls of my apartment. The largest of the paintings was an Emmett Kelly face. Clowns never smiled the way I saw them. Clowns were always hiding something traumatizing.

When Will died, my other mother (Will's mother), gave me this Emmett Kelly figurine that Will had always wanted from his grandmother's house. It nearly crushed me when I opened it because of what it had always meant to me. It meant things she didn't even know it would. I knew I was changed when Will died and I would never be without that traumatizing event that had happened. I had lost my brother and best friend.  This particular figurine was named Willy. Imagine that. She didn't even know until she looked it up before she gave it to me. He worked on a train yard with his hands, just like my brother.

This was the single most meaningful gift I have ever received.

So I see a clown today making balloons for kids at a restaurant. We were sat at the table right next to her station, so we saw countless bratty kids coming to her for balloon after balloon, then popping them and asking her to make more. She made them over and over as these kids, with their parents blessing, continued to bring broken balloons to her to make new ones and never giving her a penny for her time. She smiled the entire time.

We were cashless. We don't carry cash anymore. We were trying to avoid her making the kids anything because this time we didn't have a tip, so we were careful to mind our own business. She approached us when she had a spare minute and asked our kids if they wanted a ballon. The kids said "No thank you" and we explained we would get some next time. She frowned at us and asked the kids if they wanted a balloon again, which forced us to explain why we didn't. She shook her head at us as if we had no idea what a clown was for. She made Aevry this princess that she told her wasn't even on the list because it took so long. She made all of these kids wait in line until she was finished and handed the most glorious balloon image I had seen. Then she gave Caeden a Tiger's balloon baseball cap. This was a moment that I will remember when I forget that some people still bleed.

Some clowns just want to make people happy. It made me really sad to not have a hundred dollars to give this woman who just gives to others. When I have it, she will get it. I asked for her card in case she isn't there next week.

The story reminds me that people really need love. If a clown in a restaurant could cause me to pen these words, then maybe I could really try harder to be a compass in another's life. People are speading in all different directions and many of them are the wrong direction. Maybe a little love could point them forward.

Email ThisBlogThis!Share to TwitterShare to FacebookShare to Pinterest
Labels: clowns, Will