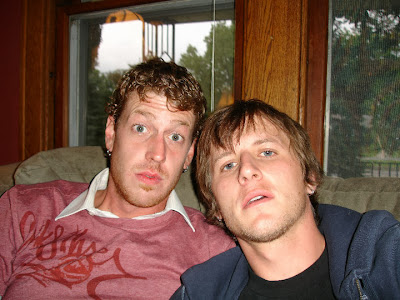 Four years today since I last saw him; His birthday. He turned 32 on that day.


Happy birthday where you are now my big brother.


Sometimes you don't have anything nice to say, but you can't just NOT say anything at all. Sometimes things need to be recognized despite the sadness they bring. Sometimes when speech defeats us and we shiver out the inner most chambers of our memories, it is best to look up. There aren't many good feelings in me today. I've been pretty foul from the moment I awoke. It really gets frustrating trying to sort out the mixture of joy and grief during the holidays, and especially his birthday. So I'm not going to write anything sad or negative today. I'm not going to show you what's inside because what's in there isn't productive right now. What's inside will pass in a few days and I will resume the clown I have always been.

So instead of pouring out. I'll tell you a story about my brother, whom really isn't my brother.


We met in church. We would go every Wednesday, Monday, and Sunday. Wednesdays were the family classes, and for some reason the kids in the Starter jackets always stood out to each other. We would glance at each other in a moment of respect and do the "cool guy" nod. I had my Tarheels coat, Will had the Bulls coat, and Joe, always the outlandish one, had the Triple Fat Goose with a metal plated Raiders cap.  After a few weeks of "cool guy" nods, they told me to sit with them during church after Sunday School. I was down for that. My only other option was sitting up front with the youth group kids who had a leader that had this head that look like an actual penis. He used to always shush me. I don't do well with being shushed, especially by phallic heads.

I sat down between Joe and Will next to their parents, who would become another set of my parents. I talked through the entire service. I talk when I'm nervous. Will's mom was horrified at me I think as she kept having to tell me to be quiet. Joe pulled out an old Atari handheld game and that shut me up for a little while. After church, despite the frustration Will's mom must have felt with my loud and obnoxious tone during Jesus time, she invited me, my brother, and my mother out for Chinese food.

Did I mention that I was the pickiest eater as a boy? I ate McDonalds, cereal, PB&J, bologna with mayo, and pizza. That was all I would eat. What even is Chinese food? Cats? So I get to the restaurant and listened to all of the exotic entrees being ordered that sounded like noises my furnace makes in the night and tried to decide between eating cat or eating walrus. I chose a cheeseburger with fries (because none of my other options were on the menu). The whole group, including my own mother scowled at me and shook their heads. Who orders that there? We ate, I did a lot more talking, and I had a new place to sit on Sunday mornings. I eventually joined them at their high school and we became family. My heart melted into their home and I became a staple at dinner. I even learned to like Chinese. Will's mother treated me as her child, even yelled at me like them, which I think I appreciated most. Their father bailed me out of my folly as a real father would. No one questioned my presence or tried to push me out. Their home was the warm guts that people paint Christmas portraits of.