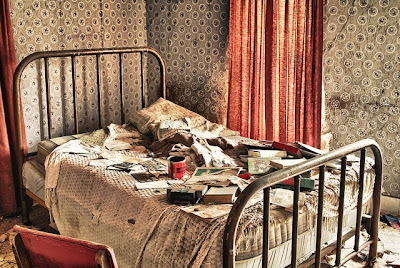 We climbed into the 1990 Ford Econoline conversion van. It was the dead of winter. The part of February that everything seems sterile. The snow isn't new, it's grey and packed deep into everything surrounding the paths shoveled out twice a week. The air itself smells of salt and stale cold water.

When December comes, 30 years later, you will sit outside and catch the snowflakes on your tongue and cry thinking of doing that same action 30 years earlier as a boy. You remember the way your scarf would bother you as it collected your breath and rubbed your spit across your face. You remember the snowballs and the tears mixed with snow dripping down your red face.

It's not December 30 years later. Today the snowflakes just fall onto deaf eyes. In the van are my brothers. Kids that would never make it out of this place, just like you. There were kids that went away to college and became all of these glamorous people with glamorous things. They had cabins "Up North" and came home from work everyday without cuts and scrapes across their hands and arms. We were the kids that buried their hands in the snow to take hold of two by fours to carry up a ladder to the roof of the new construction would-be homes.

We were the ones that would never make it out, not because we didn't have the skills, but because we didn't want to. We loved this place. We loved the familiarity of every street we drove down. We loved going from place to place and rebuilding and exaggerating all of our memories.. We would get into that van and drive for hours, smoking cigarette after cigarette, making fun of each other.

This night, we would put on ski masks and go to the liquor store and just buy some coffee. We would get out of the van and rush into the store and tell people to move as we passed them and grab some beef jerky, potato chips, and machine mixed coffee from the thing by the coolers. We would approach the cashier with the masks on and look him no where but the eyes and set down our prospected goods. He would pause and stare us down. We would keep our hands on the counter and stare directly into his eyes, waiting for him to react. He did first as he reached down to the shelf under the counter and showed us the handle of a handgun. We didn't look away from his eyes, or pretended not to. I slid the money over to him. He dropped the gun back down and grabbed the money and put it in the register. He took out our change and dropped it on the counter in front of us. We didn't break gaze with him until we turned together and walked, leaving the change on the counter.

We get back into the van and laugh. We go home and build rockets out of cardboard toilet paper centers and fill their guts with rocket engines and tissue. We mold them into the very vessels we wanted to leave this earth in someday and go outside to fly them.

3 AM in the morning is when the first was launched in the middle of the suburban street. It soured into the winter night sky as if it had no intention of coming back down. We lost it when it burned out and found the end of our atmosphere. Engineering was my oldest brother's strongest gift. The second onto the roof of the neighbor's house. The third would be found in the park across the street.

We laid down on the snow packed grass and spoke about getting into those rockets and flying away one day. We watched planes scratch the sky above us, wondering where they were going and what kinds of people were on them. Maybe we would want to go somewhere someday. This night has been sitting in my memories for years and years. This was a picture of the only thing that made me happy as a teenager.


Many years later I would return to this house. One brother gone in his rocket, and the other somewhere between grief and loneliness. The house is boarded up and the the windows broken. I climb in to see the place I used to sleep next to my brothers. It's February again, the dead of winter. The street is now a dead end as the new freeway has been built at the end of it. There stands 4 houses on each side, 5 of them covered in boards.

I see my bed, still unmade and full of ashes and dust. I uncover a spot to sit down and look at the ceiling I spent so many hours looking at before life became fast. There is a feeling of emptiness there, yet I still see the memories of my life here. The wallpaper is cracked and peeling, but I still see them as they were when we were kids and everything was as it should be.

I look over to my pillow that still lays at the foot of my older brother's bed below and smile. I pick it up to smell the distant scent of my youth. I look down and see something that I cannot explain. I see a rocket. A pristine rocket lying under where my pillow was. I picked it up and examined it. It was the same rocket my oldest brother had climbed and left us behind in. I pulled out the burnt rocket from the inside of the toilet paper tubing and smelled it. I still had a faint smell of burnt sulfur to it that brought me instantly to another place. I began pulling out the tissue packing used to balance the rocket and give it weight. As I did, I found a piece of paper crumbled up. I knew I had found what I was looking for. I opened the paper up and read the words "The World Never Changes For The Dead End Kids."

The tears ran on and on until I got up and put the note back inside the rocket and put them both back under my pillow and left the house. As I walked away, I looked to the broken cement of the driveway and pictured that van and my brothers waiting for me to join them. I smiled and looked to my right to see the dead end sign that reflected the night.

I got back into my car and went home.