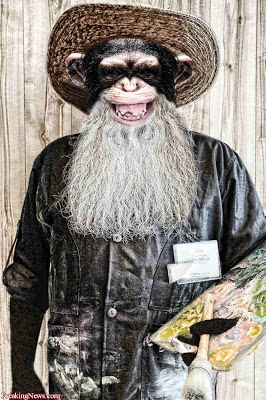 Good evening. Good morning. Wherever this finds you, hello out there. I haven't posted in a while. To be honest, I had run out of things I believed in enough to speak about. Whether you're in China searching for a picture of an animal with a human's beard, or in Alaska actually searching for whales, you are now here. This is my little neglected home where I write things down. This is my history, at least the history the way I see it.

I was driving today, stuck in the gridlock and dazing into the sky at a plane scratch the sky (as my daughter says). I started thinking about the plane and who was on it and where they were going, I didn't know, so that led me to smile at my daughter saying that, whenever she looks into the blue sky. I was thinking about what makes things that a kid says so cute and precious to people. I could have just as easily said the same thing and no one would smile at all. They would just stand still, then look down at their phones. I think maybe it's their innocence that draws such attention. A kid says something so little, yet it stuns people into this memory of themselves being so frail, yet so empowered to say or do whatever they wanted.

At the heart of happiness, there is transparency.

A child is happy because they are open. They have no deep secrets or insecurities. Insecurities are learned from ridicule. Children should never be ridiculed. Neither should adults. Kids are happy because they don't know about the world yet. They're safe in their homes watching cartoons and waiting for their next desire to be fulfilled. They are doing exactly what a child does. They get a little older and life begins to show them the world and all of it's beauty and wonder and despair. For many, the darkness hides the beautiful things and for others, the light exposes the root of the darkness. For me, the despair was all I could see. I saw only the bad in people without really acknowledging the good. The world was wilted flowers to me. I had an idea that things were once beautiful gone terribly wrong and now filled with the remnants of what used to shine in the sun. I realized after many bad things that I was just hiding. I turned the lights out. I was finding the darkest places and living there. So I made a decision. I made the decision to let go of everything I had been taught about God and whatever He supposedly wanted from me. I had reached a place where there was no more down. I just sought out something different. I found it. Things changed slowly with work and frustration, but they were changing. Something about me was changing from within. I asked God if "He were really real and had something to say to me, then say it so I can here you." So He did. All of those things that made me so angry and awful to other people had to go. They had to be exposed. I....had to be exposed. No more hiding. So I painfully devoted my life to living without secrets. I have failed many times, but I am continually reminded and motivated to let every stranger know exactly who they are dealing with.

Transparency attracts people. People want to be around someone they can trust. It's both refreshing and scary to them. It makes them angry when things are said that aren't what they wanted to hear, but keeps them coming to you because they know beyond all that you can be trusted. I think many Christians have real issues with honesty, including myself. I think that our words about God should be few. We are often quick to share the words of our faith and keep the obstacles and troubling truths silent. People are smart. They see through this as a scam. In honesty, it is a scam. We hide the difficulties of being a person with faith in Jesus silent to attract people to the more attractive aspects. We tell them they will finally be happy and free, but hide that their family may reject them and ridicule them for their senseless faith in the unseen man-made superstitions of the Bible. We tell them them that God will protect them, but hide the notion that people all over the world are taking leaps of faith and being slaughtered for it. We tell them that we accept and love everyone, then segregate and ostracize based on whatever perceived sin the person is living in. This is not transparency, this is a hoax that drives people away from God. This isn't what God wants. God doesn't want you to flaunt your freedom and condemn the others for their differences over social networks. God doesn't want you bashing and judging His Creation because you feel your rights are being infringed upon. God want's no hate or lies to spill from your lips. God wants the same unconditional love from you to others as He gave to you while suffering and dying on the cross.

God wants an open book standing right here for all to read, because people flock to truth. You may be ridiculed, but you will represent God...who was in fact...ridiculed.