The Prognosis- a fictional short story 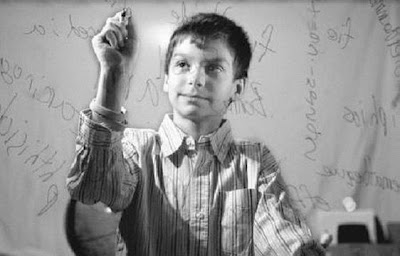 Genetics work with mathematics.  "They also work with little plastic toy monkeys," I tell myself as I pull a line of them clinging for dear life to each other from the little plastic barrel. You shake them up or God does or whatever and dump them out. Grab one of them and whichever ones hold on to another, you get your DNA. Its completely random, yet feels so completely planned. One thing compensates for another. One shortcoming weighed against one strong feature...at least for me. For some, it is all consequence.

It is about balance. This life. It is about the bad making the good so good. One cannot exist without the other. I have forgotten how to tie my shoes a thousand times I would guess, but I won't forget how to solve the most complex mathematical problems. I have always resented this gift. What good is math? How does it change a person's fate from one day to the next being able to calculate the amount of times it takes the toilet to flush before the bowl is completely white again? How does it help me to know how many seconds are left in my life? I wasn't given the gift of tact. Whoever may or may not be up there, decided that the monkeys that held on were as far from emotion that they could be, but full of cancer. I don't feel much, just the weight of numbers, which brings me anxiety. Statistics and mathematical probabilities. I had calculated my survival before the Dr. had even told me, and the numbers did not look in my favor. So I count.

I count down the days until the numbers finally and eternally become irrelevant. If there is something up there, I don't believe they have much dealing with time and figures. I would imagine it to be much more artistic, which in reality is just another way to interpret mathematics.

This is my final letter to you. This is the end. I do not have the energy to figure the binary that is taking place with every keystroke anymore. I am tired. I have been writing every night for ten days. My exhaustion has gotten worse and this record of my death is becoming more work than I had expected.

I have a real passion for good record keeping...an art also based in simple mathematics. Everything in it's right place...even me. I will waste away and turn to dust and the energy inside me will travel out somewhere different from here and join more energy and make mathematics possible for another expression of whoever is up there's imagination. Or I will just become the number of molecules that have passed away and blow with the wind into old plastic grocery bags and beer bottles. Either way, I don't care anymore. I just want to scramble the numbers. I want to shake the barrel of monkeys and see what holds on to each other.

I am not good with speech. I stutter. I say inappropriate things that seem to bypass my mind and cross my lips. When my Dr. told me it was over and mathematically there was too minute a chance of success to continue, I just said "Ok, when in Rome.?" I had just watched a movie that said that as a joke the night before and it was the only thing I could think of to say. I didn't laugh at the joke when I heard it and the Dr. didn't laugh when I said it, but I think we both understood it in this situation.

I have never been on a date. I got close once. I had miscalculated my odds with this girl. We grew up together. Well, she used to babysit me. I never saw it as babysitting. Somewhere I always thought she was always coming over because she wanted to see me. I waited until it was mathematically appropriate to ask her out...I had just turned 18 and she was 26. I had miscalculated the way she looked at me which was something I had never seen before as being love. I think it may actually have been pity. I asked her to come help me hold the dog down to bath her and when she put her hands on the dog, I leaned over and kissed her. She got up and the dog ran off tracking soap and water everywhere. She just looked at me embarrassed and again with that look I had misconstrued. It was then I learned it was pity.

I have stage 4 lung cancer. I didn't get it because I smoked. I would never take such a risk. I got it from the barrel of monkeys, yet no one in my family as far back as 1878 has had lung cancer. I worked most of my life as a medical statistics analyst at The University of Michigan Hospital. The statistics always point to cigarettes or our parents, and there really are no happy endings. One gets cancer before they could have been treated and the cancer gets worse as they dump toxins into you and try to kill your entire guts to kill it. In the end, the majority of stage 4 get bad news. Good news is a medical anomaly. So I am not keeping my fingers crossed. I am instead writing this death journal because someone who cleans out my little apartment might decide to look into the black and white camouflage looking notebook sitting right here as I write, and read my about my journey from here to there...from mathematics to the abstract.

I'm not going to cry now. I will open the results. 2 weeks after they arrived to my house, I'm finally opening the results. I don't quite know why I waited so long. I guess I have always rooted against the numbers...against everything I have ever believed in. So I open it slowly while my hands shake. I pull out the sterile white folded letter size sheet of paper and read it.

The little cursor in my head keeps blinking on and off, waiting for a conduction that would stimulate my body to tremble and tears to fall. But they never fell. Nothing happened. Ten days after my diagnoses, my prognosis says I am gonna live. I pick up the letter and set it on top of the refrigerator and head off to work.