Probably gonna upset some of my friends with this one, but it has to be said. My last blog I eluded to our methods of living as an unashamed Christian in a politically, but not-so-necessarily correct society. The answer is love. I think one of the issues that Christians have is that we aren't used to watching a world deteriorate, especially when it is deviating from our moral or spiritual values. Those that don't profess to be Christians do this just as much as we do, but we are called to be different from the rest of the world. The Bible calls us to live as aliens here and to not get too comfortable. The Bible says to rejoice in persecution against us for the sake of Jesus, because we are now sharing in His suffering. So where is the joy?

Anger and arguing. This is what we are called not to do. Yet if they threaten our guns or our Bible we will gut you. I get it. I lean into the liberatarian room, I understand and wholeheartedly agree with our country given rights to bear arms. But what I don't understand is how they got tied to Christ. How did the teaching of Christ symbolize a weapon meant to inflict bodily harm on intruders? Didn't Jesus tell you to give your robe to the one who steals your coat? When Peter hacked off the ear of the guard coming for Jesus illegally, did Jesus not put it back on, heal it, then rebuke Peter for living by the sword. Didn't David lose the honor of building God's temple because God said he had "Shed too much blood in His sight?" Yes there were wars and some are complicated and some warriors were sent by God, this isn't the point. The point is that it is clear that God desires peace, even when we disagree intensely. God says to do this; "Snatch others from the fire and save them." He says to "Show mercy mixed with fear, hating even the clothing stained with corrupted flesh." Somehow, this has been reworded in our actions to hate the corrupted flesh itself. We go to the fire to save someone stumbling toward it and snatch them up. We forget about the mercy part of this passage. God tells us not judge those outside of the church. Why? Because we are stupid compared to Him and don't know what we are doing. Yet some political thing happens and we exhaust our lives fighting and taking up arms when Jesus, in response to an illegal tax, walked over and pulled coins out of the mouth of a fish. That's how much He cared about fighting the powers that were. You want my money, take it. You want to make it illegal to do something or legal to do somethig else? Do it. It is a reflection of our culture. We can and should speak out, but in the end, we need not do so at the sake of violence, both in our hearts and with our words. Jesus said if you speak slanderous words against someone, it is murder. It is still your murder, even if you are speaking out about their murder.

"Take heart for I have overcome the world." Jesus said. "Love your enemies as yourself." He said. Why do we make it, "Keep your friends close and your enemies and guns even closer." I like guns to hunt animals to eat, not humans to avenge. If you want to fight for your guns, do it wholeheartedly, we do have constitutional right to them, but please don't mix them with Jesus, He never carried one.

This is not an all inclusive blog. There are many things I did not touch on. I am not against guns, just the opposite, I am against Jesus being associated with violence and our perceived rights. 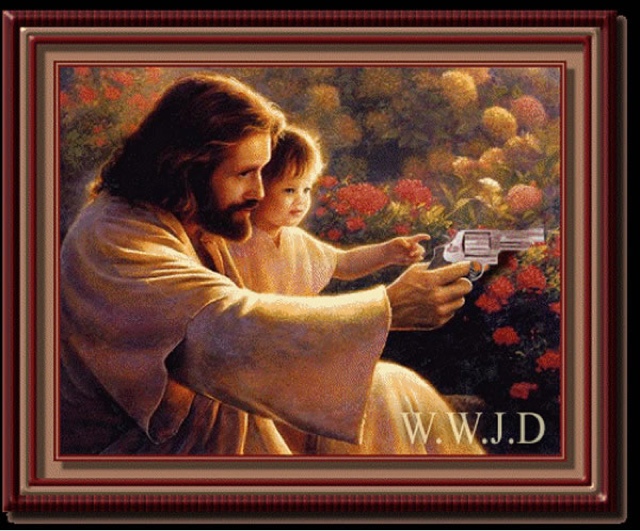