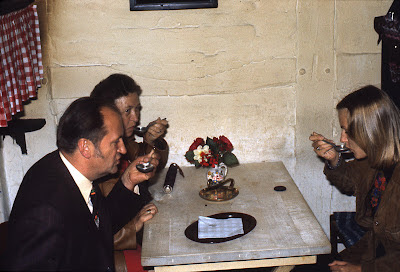 It was the autumn of 1975. I was swinging on the swing-set in my back yard watching all of the people talk to each other. The metal hinges needed oil. They sang a terrible song. There were so many people at my house. My uncle Bobby stood by the old maple tree holding a glass of light brown liquid. He would touch it to his lips every minute or two and pucker like a kiss, then sneer like he was fake smiling for a camera. He was wearing a plaid suit and pretending to listen to my aunt Mary as she spoke to him. She kept talking and talking even though he never made any eye contact. Between sips of the bitter fluid, he would just spin the glass around and watch the fluid race all around the ice cubes, spilling it twice and licking it off of his fingers. People seemed to be speaking so quietly to each other as if they didn't want anyone to hear, especially when they saw me near. They would look at me and the women you cry and hug me as their husbands would pat their backs and walk them away. I have no idea what is going on. I got up this morning and my mom put these church clothes on me and I went downstairs to all of these people. My dad was away on business and my mom looked tired, so I did everything she asked me to. I usually do the opposite. People think I am a bad kid. I like that a little.

My aunt Phyllis keeps a wad of tissue in her hands and keeps blowing her nose. I have always thought she was really gross, but today she is outdoing herself. It'd be great if she would dry her hands. She touches people on the arms and face when she speaks to them and her hands are always wet. Her lipstick is always on her teeth and smeared almost up to her nose. Her hair is a formed heap of muck plastered with some sort of fishing net. She wears big, loud bangles that alert you that she is coming. This I didn't mind so much. She always caught me doing good things this way. Uncle Bobby and aunt Phyllis never speak to each other. Uncle Bobby told me it was because aunt Phyllis was a vegetarian and they eat sponges and soap and makes them crazy inside. She told me uncle Bobby had too much to drink and tried to kiss her. They both love my dad though. They tell me I have his cleft chin. Uncle Bobby calls it face cleavage.

It's not like my mom to keep such a messy back yard. There are leaves everywhere and the trash is still on the side of the garage. People keep taking the serving tray from her and scolding her. For once, I am a little angry with them telling her what to do. We may shout at each other a lot, but you should never do what other people tell you to do. She should decapitate them with that tray. I actually picture this scene for a moment with all the blood and screaming. It reminds me of when I faked a seizure in science class with an Alka Seltzer tablet. I fell to the ground and started shaking and foaming. I even soiled my pants for the effect. Kids were screaming and no one wanted to touch me because I was so gross. I got to go home, but Mrs. Dixon found my tablets in my desk later and I my mother was phoned. My dad laughed for a split second when my mom told him as he returned from work. He covered his mouth, but I saw it. She must have too because she didn't speak at dinner.

I get off the swing and walk over to this ugly woman with the tray...this bossy ogre and trip her. She fell hard with the entire tray of lemon aid. I quickly wipe my nose with my hand and extend it to her and help her up. Boom bam. That's what it would have looked like in a Batman comic. The trip, then the snot. I feel better now. I look to my mom and for a split second, I see her grin. Wait till I tell my dad about this one. Her grin reminded me of his for a moment. Maybe there was a real person in there somewhere. Maybe she is more than just some woman who always takes orders and tries to give them to me.

Meanwhile, uncle Bobby is sleeping in the sandbox. Aunt Phyllis comes over to him and sits down on the grass next to him and wipes the hair from his face. She is the oldest and uncle Bobby is the youngest. He opens his eyes and she reaches over and closes them with her hands, then just continues to rub his hair. This family is really strange. Stranger today than yesterday. I would ask my mom what is going on if I could find her now. I sweep the yard to no avail. I survey the house and find her in the basement alone next to an old trunk my dad brought back from the war. She is looking at old pictures. Some are my dad in his uniform, some are the two of them in front of theaters with the marquee lights illuminating the background. There is one of the two of them riding a horse. She is facing forward and he is facing backward on the same horse. I walk over to her and sit down next to the trunk. I don't say anything and neither does she. She just strokes my dads hair in the photograph like it were really there. Whatever is going on outside is obviously annoying her too, so we just sit in the basement together quietly for a little while.

When dad gets home, he's gonna be sore at the mess.