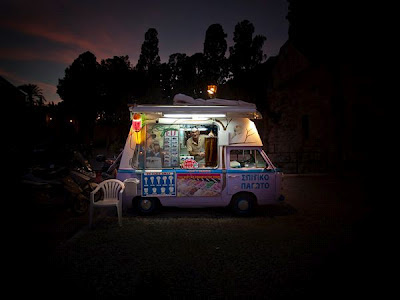 It takes real rhythm to make a hula hoop go round and round. And why try anyway? Why is it fun? These are the thoughts that occupy my mind from my thoughts. These are the things that save my life from day to day. Above me, there is a dull hum of an air conditioner window unit. It's a strange place to put such a heavy and obviously dangerous piece of equipment. I bet if the wind blew just right, that thing would careen directly through my face and sink into the pillow beneath my head. My hair is wet. Why is it wet? Because someone put an air conditioner over the bed and it has been dripping for who knows how long until it's bitter mildew taste reached my lips, then my tongue. There is a velvet painting of a deer looking at me in some meadow...just staring down the hack artist who painted it. I bet it isn't worth $5. I bet he was so excited to receive that $1 that Walmart gave him as royalties 15 years ago when this motel opened. The pool isn't empty, but the kids don't dare go in it. The water is green and it looks like plants are actually growing on the surface of it. How did I get here? I vaguely remember something about being in the back of a truck and tossing all around as the thing swerved, and a very panicked look of an immigrant as he dropped me onto, I guess this bed. Which reminds me that my head hurts. It hurts on the surface of both the front and back. I am wearing a whitish tee-shirt. It's torn and has various stains on it. One stain I recognize. I dropped my beer on the side of my plate and it catapulted spaghetti up at me bringing a barrage of curses. The rest are new and very red. Possibly related to my head hurting? I am afraid to look. I won't. It wouldn't matter anyway, the phone doesn't even work. I can already see the line has been cut. I raise my arms out in front of me as I lay on my back and do so also with my legs. I am assessing my physical function. I wonder if I am going to die or have died already. This headache is bad. Not a hangover. After 20 years of drinking, I don't get those anymore. This is more crippling than that. This is the feeling of actually having a split open head. This may be the very situation the guy that coined the term "Splitting headache" was in. I can imagine it now. So I do. I imagine it for 15 minutes to pass the time. To keep my mind from wandering to somewhere I don't want to be. But then I'm there.

I'm in an ice cream truck. I was a very young man...just recently suited up with a driver's license. It was a very hot day that day. I knew it immediately when I woke up. It felt like it feels when you wake up a little too late inside of a tent under the sun. I knew today was the day to make some money. It had rained for a week or so and I was worried about being able to pay for prom. This girl was too pretty to let her down. Kids were lining up at every stop a few blocks apart. Some kids wanted the WWF Superstars cookie bars, some wanted the snow cones with the gumball at the bottom, but most kids wanted the Rocket pop. It was always the favorite on the hot days. None of the kids seemed to own any shoes, and very few were wearing shirts. An assortment of various races and skin tones, some missing teeth, some with temporary tattoos, some that seemed to have armpit hair already. Those kids always ordered the slushes or the candy whistles.

At noon, I had to pee. There was no holding it a moment longer. I parked the ice cream truck beside the old railroad tracks that had been long abandoned. The rails were tossed all along the road and the steel was all rusted out. I popped out of the truck and into the field beyond the tracks for privacy. I remember whistling Hulk Hogan's ring entrance music while fertilizing the weeds in front of me. It seemed like forever I was going. I got all finished up and headed back to my truck and hopped in to the driver's seat. I remember thinking it wasn't such a great idea for an ice cream truck driver to expose himself in public, even if he did think he was hidden. Next time, I would stop at McDonalds. The air conditioning worked well in my truck and I just sat back and closed my eyes for a moment enjoying the silence, until the freezer door slammed shut. I jumped from the seat and spun around to find one of those hairy armpitted ones with his face covered in chocolate like some guilty raccoon in the night. He was holding a push pop, a candy whistle, and a slush from the machine. He looked at me much like the deer is looking at me now in this horrible velvet painting. He dropped the treats and made way for the door beside me. I wasn't going to chase. I let him dash past me as he leaped through the door next to the cash register.

The next few milli-moments are the subject of a lot of torment for the next many years. He flew through the air as he leaped from the truck and was intercepted by something bigger than I had ever seen. The blow took him immediately from my sight as I watched the the endless streak of dull colors pass in front of me. Then it was gone. The kid was gone. I got out and looked for him and he wasn't anywhere. No blood. No sign of a train. The rails were still in shambles as I inspected the ground. He was as gone as never having been there at all. I turned back toward the truck. Was this real? I was never the kid to take drugs or alcohol, so I suspected I wasn't high. I walked in the truck hoping the floor was clean and clear. I may have fallen asleep whistling that Hulk Hogan song and not realized it. I walked in with my eyes closed and stood there. I was too afraid to open them, a feeling very similar to the one I have now with my splitting headache. I mustered the courage and opened them and found a quickly melting pile of treats on the floor of the truck. I pictured for a moment, the kid with the hairy pits stuck to the front of a speeding train like the coyote would when being hit chasing the Road Runner. But this was not a cartoon. Whatever this was, it wasn't a cartoon.

That kid was announced missing the next day. He was never found. I never said a word. A train was never again seen on those tracks. There was no record of anything traveling on them for 15 years.

I am tired of these thoughts so in an attempt to forget them, I reach for my head. I start at my chin and my hands crawl up past my lips to my nose. There is something sticky there, but once I feel my nose intact, I continue on without panic. I reach the bones that make up my orbital socket. One is bent in a smidge, but nothing to be too concerned with, this isn't where I feel the pain. I almost resigned myself to the notion of minor injuries when my knuckles hit it. It was large. It felt otherworldly. It didn't seem to have a sensation of it's own. It was like the feeling of your tongue under the influence of novacane. I ran my fingers around it's circular circumference and back again. My fingers made way across my scalp and through my hardened hair to the back of my head. I didn't need to feel it to know it was there. It's point, both sharp and dull protruding from the back of my head. There was no doubt what it was. It was the culmination of everything I was trying to forget about. It was the doom I had expected 20 years ago. He had returned. That kid had returned. This railroad spike was for me. I deserved it. There is so much that needs to be remembered, but I fear this spike has removed them from my mind. I fear these stains are actually the particles of my brain that knew what happened last night. I suppose I will live then if I have made it this long and can move my appendages. I guess so.

Thanks for reading...Z
Posted by Zombie at 3:31 PM