Just a Story and Nothing Else 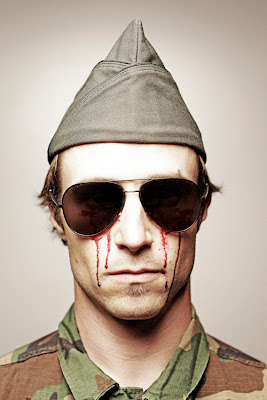 I woke to tiny flickering flames scattered around me. I can't believe I made it. There was all this fire and there was me in the middle of it, covering his head from the disaster. I guess it didn't end up reaching me after all. After all the pleading and wailing about not wanting to die. I guess by sheer coincidence, everyone died but me. This wasn't the fire of movies where people would run around silently and fall into the fetal position. This was real fire and I was surrounded. People were covered in it's flames and screaming for help and I would just hit them with this branch to keep them from setting me a blaze. They didn't seem to have the peace that those guys in the Life magazine seemed to have when covered in flames.  I hid underneath the branches, beneath the snow, buried in the bodies of the dead. Some were not yet dead, but I ignored that and remained quiet. I listened to a night full of screaming and bullets and the sound of dirt being rocked from it's resting place and spitting all around me. The sound of gunpowder doing what it was always meant to do. I closed my eyes and for the first time in my life, I fell completely asleep. There was nothing to keep me awake. There was no worry. All was lost around me and soon I would be too. There was comfort in that. Realizing that, even though it is terrible to die, it is amazing to be able to glance at your life's itinerary and laugh, ripping out the pages.

I opened my eyes. I wasn't sure what I was looking at, but the sound I was sure of. It was birds chirping as if it were any other morning. They seemed to be in unison. They seemed to speak poetry as the sun infiltrated my eyes and what seemed like a dream became reality. There was blood. There were smoldering bundles of things resembling camouflage. There was an inhuman silence that shrieked louder than the screams of my dreams. There was the reality that everyone was gone. Worse than that....I hid through everything. I hit my burning friends with a stick to keep them from me. I guess this is my life. I guess I always keep people from me, especially when they need me. "No matter now," I say as I brush off all memory and bad thoughts. I return to base and tell a story entirely different than the one I remember. Wives feel better. I feel better. Kids feel better. Instead of screaming for his mom, he jumped in front of a bullet to save me. This story sits better. It really doesn't matter what I say does it? I can say whatever I want about it, it won't give them back the guy that had to eagerly wait for the letter announcing his son's birth while in the infirmary, but dying just prior to receiving that letter. It won't do anything.

I am a coward mom. I could not have been quieter in that hole. I heard noises and footsteps so close to me and willed my body to be still. I should have waited until they got past me and stood up and killed at least 5 of them. I didn't. I waited and shook like some woman after an earthquake. I acted like a victim.

I don't know if you will get this. Word is the neighborhoods are under attack and losing, but I refuse to think of those consequences right now. I am alone. I cannot come out of this hole. I just can't. People told me Halifax was gone. I won't believe it. You have to be reading this right now. You just have to. It's all I have left. I am gonna close my eyes now. I'm gonna dream of you on purpose and when I wake up, you will be there right? You will be there?