When You Wake Up 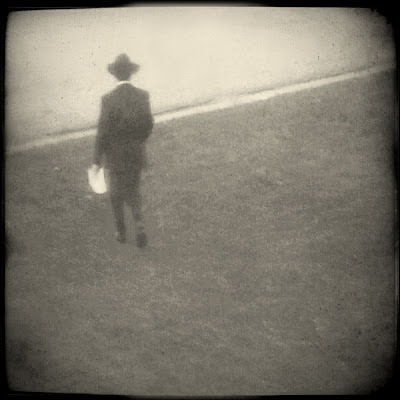 He picked up a picture of his mother attached to his father, only with a label on the side. The picture was old enough that his fingers caused damage to the delicate peeling that threatened to eliminate the memory of it's subjects. It was like a fire had peeled it away for years and years. The scrape of the wheel and the flash of light brings out the shadows hidden behind the cracks and 70's chandelier giving light to darker places in the memory. Smoke billowed from his lips as he breathed in what would pierce the amateur breather. Below, his feet kicked back and forth, just as they did when he was young and sat in this very same pose in this very same moment 20 years ago. The chill in the air made the smoke billow like a forest fire from his mouth as he blew rings which seemed to connect for a moment, then evaporate into the night sky. Beside him sits an entire box of memories all tattered from different fingers holding them in different atmospheres. He throws the one in his hand into the water below him and watches it dance with the moon until his eyes could no longer see it. He reaches for another. He is wearing a cape in this one, and running crazy, pointing at something on the other side of the camera. His hair was long, curly, and blonder than he ever remembered it. Behind him were streamers many different colors and children laughing as though no one were watching them. No shame or feeling of embarrassment for their lack of human dignity. They are little eulogies for their own funerals that will be taped to a poster board many years from this moment. But here, they are more alive than the stems that pierce your fingers when you pick the rose from your grandmother's garden. He watches his own hand fling it into the abyss and watch it join the parade of dancers fleeing the place they have called home these last 20 years.

The last one finds purchase in the moonlight saying goodbye like the loons do when the sun is going down. Finally a key. He knows full well what this key unlocks, but in his mind, what it has locked. He throws the key high into the air several feet in front so he can watch it's reflection tear through his eyes and into his heart, knowing this is the last of it. This is goodbye. He cannot hold on to it any longer. He has to let go now. He knows there is much more on the other side of where he has taken residence. His home for his entire life feels no more like his home now than a box in the water, floating toward the morning sun taking in water. The ghosts that once sat at every corner waiting for him to pass, now sleep in the sun, appearing only in his dreams from time to time. What kept him here is gone.

He climbs back over the wall and walks back to his car from the bridge. Something is pulling him back and eating at his throat, but it is ignored this time. He looks straight forward refusing to become ashes and turns the key and presses down the pedal. He knows the sun will be up soon.