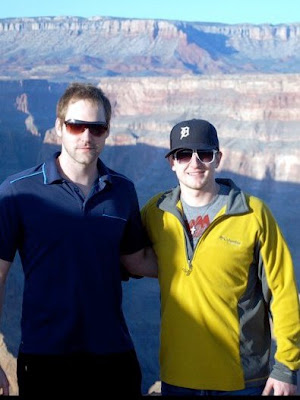 My little brother Andy and I at one of God's greatest wonders.
Have you ever ran away? From home, literally grabbed a bag or a hanky tied to a stick and headed for the hills and into the horizon? How did it work out?

Me and Andy decided to run away for whatever reason, I don't know, but we planned to go one night on a whim when camping in Andy's back yard. I didn't understand why we wanted to run, I think it was for the adventure. There was a pink Cadillac from the 50s in the woods by his house. It was wrapped completely around this tree and actually had blood stains on the what remained of the door. There were no trails, so one looking at it would immediately wonder if a helicopter had dropped it from the sky, which I believe had to be the truth. We packed our things up and took our sleeping bags into the woods after the house lights went off and laid down in between the Cadillac and the tree to keep us from the wolves and the water moccasins, which Andy was and is still deathly afraid of. We laid there for a couple hours before we questioned why we were doing this. We talked for a while, about it as his parents combed the neighborhood looking for two soon to be orphans. After an hour or so, we got up and went back home expecting a quiet entry into the tent. Instead, we got his parents with flashlights and frowns. They were terrified. We terrified them. It is weird, but some people have no idea what it is like to be cared for that way, or how good it feels. We never ran away again.

A few years later, I was up north with this kid whose dad my mom commissioned to be an adult male role model. Turns out, this kid lived with his mom and wanted to live with his dad, so we planned his get-a-way. We planned that the next morning after we got home, he would pack and walk 25 miles to my house and he would live in my shed and I would feed him like some dog, the leftovers from dinner and no one would ever have to know. I got home and Andy came over early the next morning and we  didn't even think about it. Of course we weren't serious. How could he get to my house? How could he walk what takes us 25 minutes to drive? We went about our business of care-free play, working on our music for our band called Deathstone, when under the sound of the flames being shred by Andy's pocket, battery powered amp, the phone rang. I answered and it was this kid on the other end. I was all "What?!? : /" He was all, "I am a mile away from your house, where do I go?" "Oh S&%#." He thought I was serious, except of course, weird keyboard symbols do not adequately describe what I really said. We met him 3 blocks from my house at the community center. He had a backpack with clothes. Me and Andy looked at each other and was all, "What?!? Really?!?" and walked him to my house to figure out the logistics of the shed that would provide him shelter. We promised not to tell, but in the end, I said I had to use the bathroom inside and told my mom and she called his dad. Funny though, because I spoke to him on the phone that night and he said everything was better with his mom, she had bought him new shoes?!!??!!!?

Email ThisBlogThis!Share to TwitterShare to FacebookShare to Pinterest
Labels: Hate typing the word "From" it always gets typed "Form"