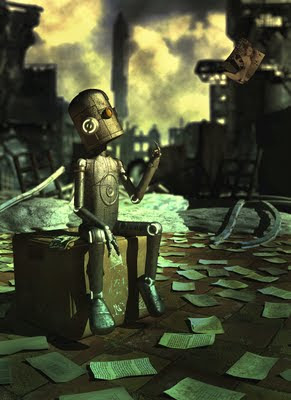 It is sad when a quilt outlives it's maker. Or even an afghan.

Mortality is the single biggest issue of my entire existence. I fear death. Not for the reasons that I will be dying. There are so many ways I could have already died and that doesn't really bother me. What bothers me is that it could have happened. Tonight a guy walks out of a gas station to another man with a gun and gets killed right there for no observable reason. Last week, an old woman curled up in bed, feeling a little more tired than usual and doesn't wake up. Either is OK with me as long as it isn't fire or drowning. The thing that gets me is being deleted.

When a person dies, their loved ones hurt and never forget as long as they live. How about their not-so-family ones? They get shocked and sad, attend the funeral and in a few weeks, you don't pass across the thoughts that dominate their brains. You have been forgotten. I hate that. I think the people of the Old Testament had the right idea. They hired mourners to wail at their loved one's funerals. Maybe they can make such a scene that people would respect your life.

People here don't have much respect for life. I saw a guy honk his horn at a funeral procession the other day because he missed two green lights as they rolled through the intersection. He had had enough and cut into the procession. He missed the point of the procession. It is about respect for humanity. People on this earth loved that deceased person. People had memories made with him or her. His kids remember being bounced on his lap and feeling his stubbled face scratch against their smooth kid-skin. Her parents remember her real-pain cry she would shriek out when she was really hurt as a toddler. His wife remembers the sacrifice he made, working his hands to the bone to keep food in front of them. So they pull their cars into a procession of people who love and respect the deceased. Some of the mourners will forget quickly and others will have grandma's perfume smell programmed in their brains forever.

We kill. We kill babies. We kill kids. Tonight someone kidnapped a 5 year old girl, killed her and burned her in an abandoned house. We kill criminals. We kill with our words. We kill with our swords. We kill honest people fighting for a different country. We kill evil people trying to harm us. The point isn't a moral one. It isn't an argument about what killing is right or wrong. It is a cry for life to be respected. If a person has to die, don't dance on their graves. Someone loved them. Imagine how the parents of a murderer feels when their child kills a family of 5. Imagine how they feel when the country rejoices at their night in the electric chair...there baby frying by electricity. Look at their faces as visions of feeding the kid a bottle and the first time he hit a baseball rush through their heads as currents run through his.  The Bible says God flooded the world because of violence. What is clear from the Word of God is that God loves life and hates watching those in peril.

I fear being deleted from anyone's mind. I know I will be, but I refuse to like it. Maybe this is a good way to live. Maybe it sparks a passion to make Christ that much more visible in me. Maybe it produces pride and an obsession with people remembering just me. I don't know, but I do know that I really wish people cared more about life. This world would be better and lighter if we did.

Thanks for reading...Z
Posted by Zombie at 1:00 AM