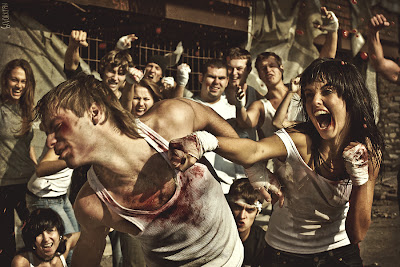 Is there an art to giving up? Just throwing your hands in the air and walking away? Like in the movie Office Space... Can I just not show up to the things that I don't like? What would that look like I wonder? My kid is throwing a tantrum, so maybe I can just sit and smile and read the funnies at the back of the paper. School kicks me in the stomach again, maybe I just fail out and chalk it up to some right/left wing conspiracy to keep me from succeeding. My job gives me a handful of white dog poop? It's all good, just lay low under the radar and allow vagal response to take over and sleep it out. All of these things are options. I don't say good options, but options that many take none the less. I don't have it in me. I just can't quit. I am a glutton for punishment or have a strange thing for pain. The problem with not being able to give up is that I have also been blessed with a very severe failure response. When I fail, I get crushed under the waves and I feel my bones snapping and the walls closing in or whatever other cliche you can think of. I WANT to quit. I WANT to crack an egg and sit back and enjoy my breakfast knowing I don't have to ever show up again. But I CAN'T. Something buried deeper in me gets really pissed. I begin seeing me against the world or whatever lame cliche you want to come up with and begin to fight. I have written about this before, mostly to illustrate how dumb stubbornness can be, but I think that God puts this fight in us. We can use it wisely and know when to hold em or whatever horrible Kenny Rogers lyric you can think of, or we can use it to rebound and recover.

I've been hit a lot. Sometimes I feel like some abused child sitting in his room listening to his father yell at his mom knowing he is coming for me next. I expect the worst in most things and I am not sure if that attitude actually causes the worst or not, but the worst usually happens. Not the worst thing ever, because many are going through that right now as I type this, but the worst that I can think of at the moment superficially. It isn't me. It isn't me who overcomes. Jesus said to take heart because He has overcome the world. He also says that He works all things for the good for those that love Him. I know it is God, I just am baffled at His methods. Because I am human. It's OK to not know everything. It's OK to get turned around by God and get confused. This is the human condition. We don't get to always know where God is leading us.

There is this line from the song that has stuck to my head for the last few weeks as I have been wading in constant trouble and turmoil. It's from one of my favorite bands The National. It says: "What makes you think I enjoy being led to the flood?" It is precisely what I feel sometimes. I know as a pastor, many will lower their glasses and shake their heads at me for saying this, but sometimes I get frustrated with God. Sometimes I really hate the way I have to learn things. I get really tired of being tested and failing as though I were expected to somehow pass an impossible test. I try to follow as closely as I can and yet it usually ends up with me being crushed and stomped out.

But then there is this thing inside me that tells me to fight back. To stand up and keep fighting through and you know what? I always see the other side of it. Not because I am strong, but because I am weak. God breaks me so I can be used by Him. He then stands me back up and leads me through the dark valleys. I have said this before, this is my anthem for life. I can't answer why horrible things happen, but I can tell you that God is good. He always has been to me. He has the habit of crushing the pride and will to rebel from me and setting me on my feet scarred, bleeding, but determined.

Thanks for reading...Z
Posted by Zombie at 1:01 AM