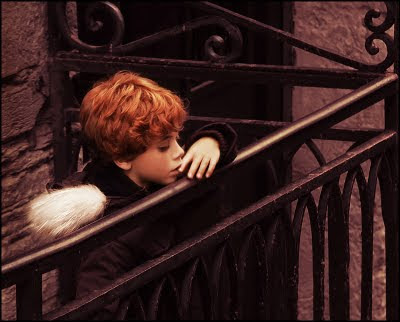 From the view of where it all started, it would be really hard to see the way things would end up...at least for now.

I started blazing like the sun. You could not quench the fire inside me. You couldn't deter me from pushing forward, despite cardiac arrest. I was in love with learning. I was in love mostly with God. Sleep wasn't important. Every second I could, I would drink coffee (My replacement for more destructive beverages) and open my Bible. Then read books about loving Jesus. Books about how to show that love to other people. Books about what the Bible means (I wasn't developed enough to understand hyperbole or symbolism or parables) I took it all literal... especially Revelation. I will get back to that, Revelation comes at the end of the story as we know it. I was crazed. I was a fanatic. I was ready to die for what I was coming to know of God in my life. Knowledge was everything to me. I ate it like food and stored it in my cells for when I needed energy. I push people away because of my intensity. I judged others without realizing it, just by being too pushy. I wasn't proud at all, I knew the other side of their plight for the world, I had been in the depths of the dragon and felt it's fire. It singed my face. I wanted no one to suffer. I came on too strong for most people. Heaven was to me, the beginning of all things. I was ready to die.

Now what is interesting to me is that just moments before I gave myself over to Christ, I also wanted to die. I think the idea of a noble martyrs death instead of the quitters death seemed more attractive. I was still looking for a way out because as excited for God as I was, I was still in hell. I still wanted out and this gave me a real outlet and a Savior King ready and waiting to except me. What could go wrong?

Jesus was laughing. He wasn't going to let me die on some cold train tracks somewhere away from anywhere. He wasn't going to let me die of a cardiac arrest caused by premature ventricular contractions precipitated by Wolfe-Parkinson-White Syndrome. He sure as I write now, wasn't going to let me die in some fool hardy quest for martyrdom. The problem was the death that I was still seeking. He knew that. He knew I wasn't cured yet. I told everyone that the sadness was gone and that I wanted to give my life to Him, but never mentioned the possibility of living through my 21st birthday. I still didn't want that. I wanted to go to Heaven. To quit. Still taking the quitters route.

Revelation. The end of all things. Is it? Is it the end or the beginning? This book full of both literal warning and imagery describing things that are unimaginable for anyone. The day we get new bodies and minds. The day, those that oppressed got there's. The war on earth. The outpouring of the Spirit on His children. The wedding feast to end all feasts. The break in war to celebrate the coming again of our precious and wonderful Messiah. The beginning of all eternity...of all new things. It's exciting really.

I saw it as another way out of life. If I weren't going to get that martyr's death, I was going lead the rebellion against the One World Government (I cannot even imagine the people that statement is going to bring to this post from Google searches... holla if you are one of them). I was again, a fanatic. Not the kind that goes to every football game on Sunday and reads about the team when the paper gets to the porch...in that case I am a fanatic as I rise to church every Sunday, read the Bible and study Christ. What I meant was, I was the fanatic that was a little scary. The kind that you want to settle down a little. I was too eager for the things that completely missed the point to what was really going on inside me. I should have focused on love. I should have focused on callousing my hands instead of death and the end of all things.

Over the years, God has broken every barrier to Him that I can think of. I am sure there are more that I am still blinded by, but He has been faithful to forgive and to mold me into a person that resembles someone that wants to try to show the love Christ has for them. I am flawed. I said in my "About me" that I don't make sense until the end. Well I don't. It didn't make sense to focus on death when I was just given life. I will not make any sense of anything until that day, when everything begins. Heaven awaits, but my hope is that I get more time here to be a model of God's love for those in peril, on or off the sea.