We Collect On The Ground 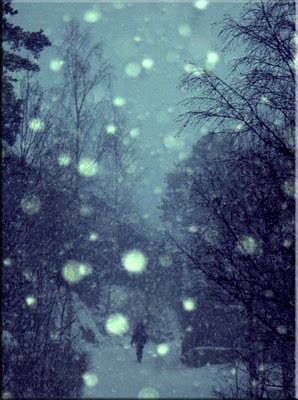 When was the last time you were young? Youth isn't measured in days, hours, or minutes. It is measured in isolated seconds when you realize the things that have no use and the things that do. Youth is that brief moment when things that rust loss control over you and a feeling of real innocence and beauty takes hold. It can bring you to tears. Looking up at the night sky when a blizzard of snow falls all around you. There is no escape, so you look up at the lights that radiate from the moon and stars and stick out your tongue to catch a snowflake that you were once taught was profoundly unique from every other.

This is a picture of what God really is. And who we really are. Even the snow is unique. Even the snow was crafted by an intrinsically creative and beautiful God. How much more beautiful are we than the water that collects in the clouds and falls through the cold air and along the line transforms into something different altogether. It collects on the ground. We collect on the ground.

I wish I could return to that place of innocence that makes a child a child. Sometimes I feel like I just cannot get back. It's sad to think about. To think about the dancer on the pole that spins and circles finding a different place in her mind than where she really is. She used to sit on her grandpa's lap and he would squeeze her tight as the scruff on his face would inadvertently scratch her. He smelled of English Leather and pomade. She grew up and turned into something altogether different. She was beaten up by those that she loved and left behind. She learned how to hate. No one is born with hatred, it is a learned emotion that comes from abuse and disappointment. When she played with Barbies, she never pictured them on the pole, but deeply in love with a wonderful family. She never knew that Ken was such a beast filled with lust and carnal urges he doesn't know how to control.

In fact...Ken used to catch the snow on his tongue too. He would go to the park and spin around on the merry-go-round, moving to the middle and watching the world pass like lightning all around him. The lights blur, and still blur as a grown man that never knew what it really means to be a man with integrity and grace. Years of disappointment and hate have soiled the innermost places in his heart. He never wanted to treat Barbie so badly. He never wanted to treat anyone so badly. But here he is feeling both gratification of lust and utter humiliated shame watching Barbie spin around like a toxic ballerina.

Both of them still see the sun. Neither of them recognize what the light means. The light was meant to show us something better. God used a light to guide the wise men to worship the Messiah King born with ten little fingers and ten little toes. The King that would maybe catch a snowflake on His tongue and be reminded of His Father. The light was always meant to lead us to our Father.

I never knew my father until I met Him in a bathtub with a razor in my hand. I never knew innocence until I watched my daughter stand on a chair to turn off a light. These things are meant to lead us to our Father. But it is so hard to get back. It is hard to experience those seconds that we remember and suddenly not much really matters outside of God and the love that pours from His very being into every crack that the world has made in us. When you light a firework, it is ugly. It is a pieced of cardboard with a wick. But when it bursts, we see it's real beauty. Maybe we need to burst. Let go of the things that try to hold back our beauty and be someone's light that leads them to God.


To leave a comment, click on the specific blog title and the comment form will be at the bottom of the page.
Posted by Zombie at 10:35 PM