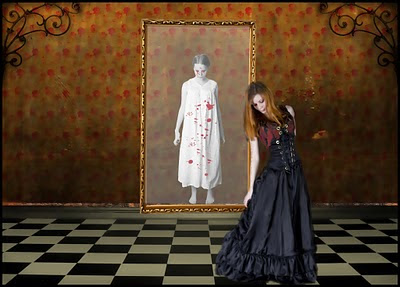 There is something called The Urban Legends tour here in Metro Detroit. It consists of these little secrets that all the teenagers used to know about. I don't know if they all still exist or if teenagers have found new ones yet, but these used to be a major thing we would do on a Saturday night.

Here are a few.

1. The red brick house- this was a house of a family of one child. The mother apparently backed up over her kid and killer her. One night after, she lost her mind and painted the entire house red. The bricks, the shingles, the fence, the door, the siding...everything. She kept a doll, the size of her child in the window and changed it's clothes every day.

2. Reflector Alley- This one was scary. He was this guy who killed his entire family as a child with an ax or machete or something. He was sent to the impound lot for kids who are broken for a while, then released on his eighteenth birthday. The state gave him a small house in the middle of the woods away from civilization. He put reflectors on all of the trees on the way in so he could see people coming down the long and winding one car dirt road. He would come chasing you with a shotgun or something. Swear to sacred things, he did twice when I went.

3. The Nun- She stood in her front window 24 hours a day praying for the world. We would come up to her and look at her and her eyes would follow you as you moved. Never really was sure if she was real, but either way, real or not, it was weird and freaky.

4. The Stain Glass Church- In an alley in the middle of the night, you could go up to the back of this old Catholic church and look into the stain glass widow at a picture of Satan. On the inside, they had lights that would "Conveniently" appear to light up his eyes and stare out at you.

5. The Pink Castle- There was this castle painted pink that apparently was occupied by a homosexual cult that would sacrifice young virgin boys to their god. Never saw them, but the castle is definitely pink.

6. Little Rose Chapel- She was a stigmata victim many years ago. She supposedly died of the wounds Christ had. There is a shrine to her out there. She is buried in the back yard and the little chapel is open 24 hours a day for people to pray to her, the pope, and God. Incense, candles, and strange and scary relics are everywhere.

The sad thing to me is that most of these are all gone. Things I showed everyone and freaked everyone out with. Places that I spent my youth. I think that every community has these places, whether true or not, you loved them. But things cannot last forever.

1. The Red Brick House- They must have moved because the house is painted normal now and the doll is gone.

2. Reflector alley- I was so scared of this one that I never went back after the second time I was chased out. I don't know if it still exists.

3. The Nun- She is gone, for whatever reason, she has stopped praying for the world in her window. What a disadvantage to the world.

4. The stain glass church- Someone broke out that window in what I can only imagine was a fit of rage.

5. The pink castle- Overgrown with weeds and no sign of life.

I wish nothing ever ended. I wish I could revisit the things that are gone with the people who are gone.


To leave a comment, click on the specific blog title and the comment form will be at the bottom of the page.
Posted by Zombie at 1:52 AM