I Feel Like I Have Been Hit By A Truck 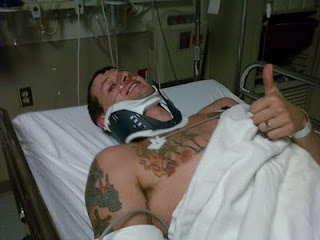 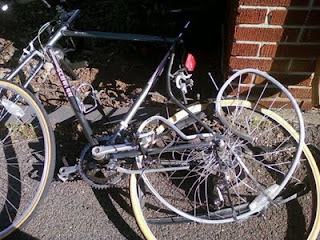 What are these feelings I am having? I should be celebrating! I should be so excited about the outlook on my future. I should be laughing right now. But I am not. I am humbled, extremely grateful, different. But I am not laughing. This post will be long. I try not to write too much at a time to spare the reader from boredom, but I am going through so much all at once and I can't quite figure it out.

For those not on my Facebook, the pictures above were from the middle of the night between Sunday and Monday. Sunday night, while cycling on a main road at 11:45 PM I was hit from behind by an apparent drunk driver. He didn't see me, so he didn't hit the brakes. I was impacted and lifted off of my bike into the air at 40-50 MPH. It was in this moment that I had my most vivid memory. I looked up and saw sky as I was in the air about to come down. My only thought was that once I hit whatever I was destined to hit, I would be gone. The tires would roll over me and that would be the last time I opened imperfect eyes. So I fell slowly. I hit the truck on the windshield and that impact spun and flipped me off of the truck to it's left side, throwing me a lane and a half from the right lane to the turn lane. I landed for the second time on my front side facing the quickly speeding away car. I hit my head on the back off the windshield and on the front off the pavement, my helmet took 100% of the blows.

I lifted my head off the ground expecting to see Jesus. I didn't feel anything. Nothing from the impact to the pavement, which seemed to have lasted several minutes of falling. I thought I was dying. I could not move the right side of my body, so I began waving the left hand and shouting for help as at least 30 cars went right by looking at me through their windows and just drove on. None of them even called 911. I drug myself to my bike which was in a heap and held my phone right in the place I got hit. I got to it and called my wife first. I thought this would be the last I would speak to her, I still wasn't at all sure how bad it was, just that no one survives something like this. Just like no one survives a train. I called. No answer. So I called 911 and heard a man shouting to me. We was a homeless guy, who had looked up when I yelled, which apparently I yelled "What!" at impact. He looked and saw me upside down in the air headed toward the pavement. He ran into Meijer and called 911 and stayed with me. I drug myself out of the road to the shoulder and laid down calling my home number and reaching a scared and frantic Laura who snatched the kids from their beds and killed stoplights at 70 all the way there. By this time I had taken a mental inventory of my attached parts, my arms, legs, neck etc. Spent the night in the trauma center getting every test they could think of. The grill marks on my back were the most concerning to them.

I am alive! Nothing was broken...nothing! I am battered and bruised everywhere, but I get to hug my wife and kids. I should be celebrating.

Instead I am haunted. I fear for no reason, I am out of danger. I am crushed inside for no reason, I was saved and witnessed yet another miracle from my loving and powerful God, but all I want to do is cry, but I won't because these feelings are making me feel guilty.

Most people know that my biggest fear is sharks. The thing that scares me is not being able to see them as they accelerate from the deep and launch into the air for their prey. I feel the same about the truck that caught me from behind me with no warning. I just keep seeing the whole thing over and over again in my head and it makes me nauseous. Last night I would dose off to be wakened suddenly by the image of being hit from behind again.

These feelings I am having are not new to me. I think that is why I feel so sad. I felt exactly the same way after God saved me from the train tracks. I spent days replaying, and crying, and sick to my stomach. It feels the same, and it brings back some of those memories in a way that is more real than just vague memory, it brings back my emotions. I don't really know what to make of it.

I have a history of being hit and run. My dad did it first, then a long line of people after. I get hit hard, things you shouldn't survive, I don't feel it for a while, but I survive only to feel the pain later after the fact. And the perpetrator is long gone by then. They always seem to get away with it, although I know no one gets away with anything. Everyone is just so worried about themselves and what they will lose if they accept the responsibility for the mistakes they made. This might be the most disturbing part of getting hit. Everyone runs. Cars pass by and stare at the pathetic broken guy in the road and keep driving. Maybe they are afraid I am going to car jack them or something. A guy hits someone on a bike, doesn't know if they will live or die or if they are dead already and drives off, in fear of losing their freedom. A guy knocks up some girl and jets out of fear of losing his immaturity.

But then there was this homeless guy.

He had nothing, so he feared nothing. He came immediately to help me. He was drunk and stinking and he extended his hand to me. He was an angel among devils. It wasn't like he did anything to save my life, but he was there and stayed there until I told him he could leave well after the paramedics had gotten there. His presence made me feel comfort.

Maybe we all need to live as though we have nothing. Maybe it is just too easy to covet our stuff. I said this to myself immediately after I realized I was ok. I say this to myself with a shout because I had just previously in the night acted harshly to my wife over a flat tire on our new car. Now I can't stop screaming at myself, what an idiot. That's why I called her first. I needed her to hear me differently before I left her with my kids to fend for herself.


™Zombiehaven 2008. All ideas and photos are copyrighted under Zombiehaven. Anything used from this site, must have written permission.
Posted by Zombie at 11:53 AM