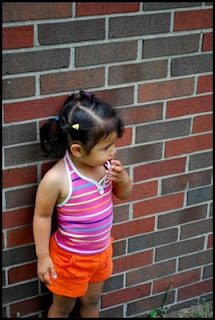 Day 3 of VBS was pretty great.One of my long time students taught the children for the first time and it is always nice to see a teenager step out of trying to be cool and give their fears over to God and reach out to another. It isn't hard to want to help these kids. Possibly the cutest group of kids I have ever seen anywhere. I will post a couple of them below. 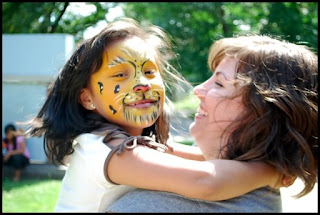 This above little one who I still cannot pronounce her name, it's like Yaire or something, latched on to one of my staff (Brittney) on the first day we arrived and has been attached to her since. She really really likes to get in trouble and do the opposite of anything she is asked to do, and randomly disappears for long periods of time only to be found attached to Brittney. She runs to to the front of the line when we are handing out candy and grabs a handful and runs away laughing as we chase her. We all love her. 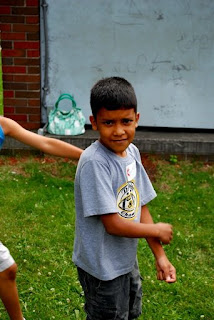 Above is Emmanuel, who somehow changed his name to Jarib over the past winter. He is fascinated with my touch screen phone and has tried the entire time to steal it. He leaned over to me after pulling up the sleeve of my shirt and said, "You talk about Jesus, but have violent tattoos." (Referring to a dragon I have on my right arm) Then later asks about my wedding ring which has trinity symbols on it and I explained the trinity, kind of. Then he said "You're talkin about the Holy Spirit with those violent tattoos on you?" So I picked him up and tossed him around for a while.


I tell you these stories because it is good to give an actual human personality to the faces we see inner city. These are real kids facing really large problems. Right now they are sweet and innocent, but what will become of them once they realize how lousy the world really is and are pressured into things they should never have to be exposed to? I guess that is why I see Jesus in them so clearly: Because I see the potential to show them the way to God early and pray that they do not stray from the path. If they do stray, I pray they will remember the teachings they heard about God, the prodigal son, forgiveness, and mercy.

Some people act as if God is in some Where's Waldo book where they are looking for any sign of Him in their lives. God isn't hiding or playing games. He tells us clearly where He is. He is in the needy, the hungry, the imprisoned, the widowed, the fatherless, the sick, the destitute, and the crippled. If you want to see Him, go there and reach out your hands and He will touch yours. This has been an awesome reminder of that for me. Pray for these kids.


™Zombiehaven 2008. All ideas and photos are copyrighted under Zombiehaven. Anything used from this site, must have written permission.
Posted by Zombie at 11:32 PM